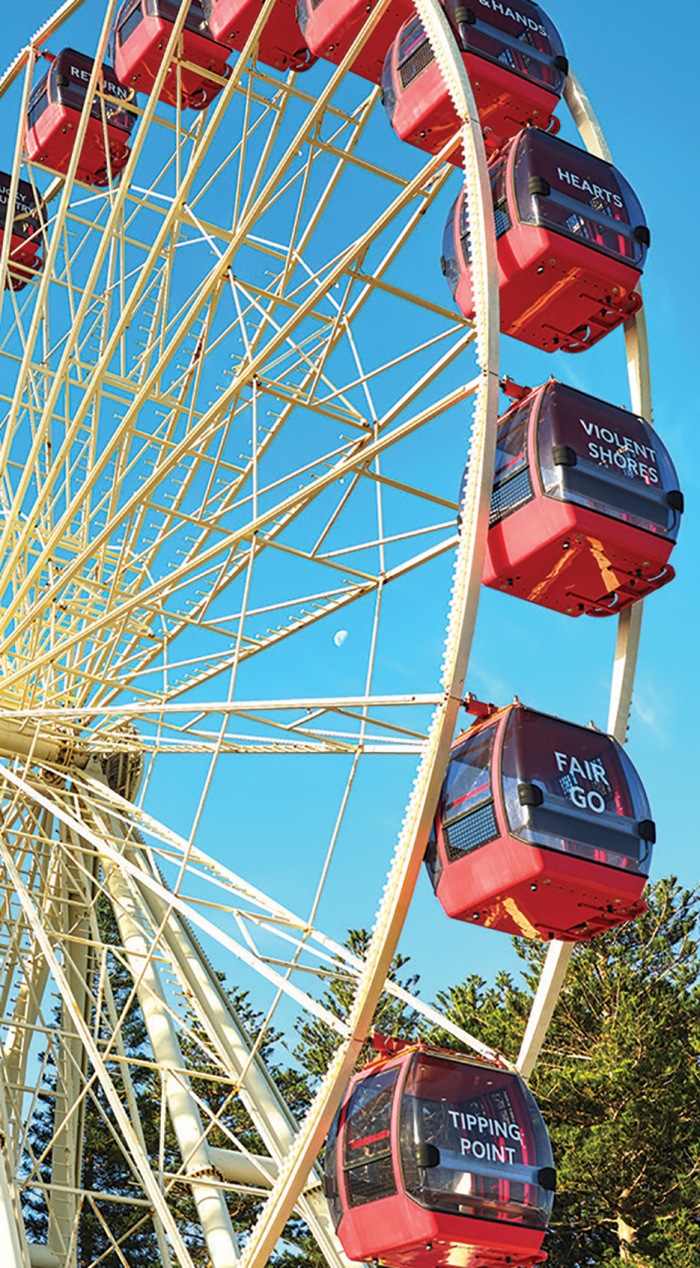 • That Sinking Feeling by Sam Bloor. Photo by Duncan Wright.

IT all started when Fremantle artist Sam Bloor was standing in the pouring rain at a protest against the Australian government’s treatment of the Murugappan family.

In 2018 the Tamil asylum-seeker family were abruptly removed from their Queensland home in an early-morning raid by immigration officials and taken to a Melbourne detention centre, triggering a lengthy deportation battle that is still ongoing.

“[I was] feeling disheartened about the size of the challenges we face around cultivating change,” Bloor says.

“When I got home I started to think about what I could do with my anger at the injustices asylum seekers face and I decided to try and find a function for those feelings that could facilitate a broader conversation.”

The end result was the thought-provoking art installation That Sinking Feeling, a thinly veiled swipe at Australia’s hard border stance.

You might have seen it while enjoying a nice family outing on the ferris wheel at Fremantle Esplanade Park, with phrases like “FAIR GO”, “TERROR” and “YOU’RE OUT” emblazoned on the window of each carriage.

The installation is accompanied by a sister artwork at the Fremantle Arts Centre, where a corridor painted in stark black-and-white funnels you towards a giant “Sinking Feeling” doorway or maybe a dead-end.

Bloor says he would like to see more discretion and compassion from the federal government when it comes to decisions on asylum seekers entering Australia.

“I don’t have all of the answers, but I think there is a really intuitive compassion that is being cast aside from our policy makers,” he says.

“I would like to see that basic human compassion put to the front of our decision making processes. The hypocrisy of colonial settlers telling people they are not welcome on lands they forced their way into is hard to swallow.”

Could the mass wartime exodus from Ukraine trigger a rethink from Australian authorities on their hard border stance?

“We have been called out by the UN for our treatment of asylum seekers and yet we shamefully continue poor practices which are endangering and damaging peoples lives.

“I would hope that with enough public pressure, policy will have to change.  We need to strongly vote with our ethics in mind, and the political machine will follow out of necessity to maintain favour.”

That Sinking Feeling is just one of the many thought-provoking artworks on show at the FAC exhibition Undertow, which explores our relationship with the surrounding oceans and seas – the conduit for some great and not-so great arrivals, and the source of transformations and deep ancestral connection.

All the art is for sale at shop. fac.org.au/products/category/undertow-2022/sort/az/page/1/

Undertow is at the Fremantle Arts Centre until April 25.