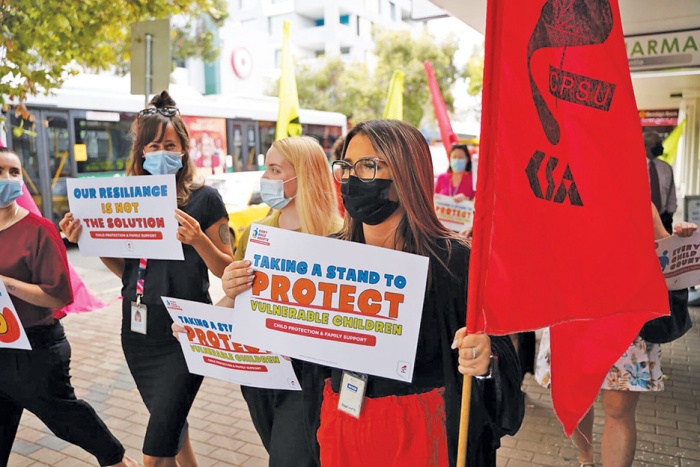 • Striking child protection workers say the workload is unsustainable and leaving them desperate.

FREMANTLE child protection workers have been forced to take children under the department’s protection home to their own families or leave them sitting in the office because there’s nowhere else to send them.

The union representing the workers confirmed what sources told the Herald after staff walked off the job on Tuesday afternoon to stage a rally outside the Department of Communities head office in Walyalup Koort.

CPSU/CSA secretary Rikki Hendon said the stop-work was called because the under-resourcing of child protection had left workers “desperate”.

Ms Hendon told the Herald the department and child protection minister Simone McGurk had been told about staff having to take kids home, or accompany them to hotel rooms after hours but the problem persisted.

“I think it is fair to say it does place workers and their families under significant pressure,” Ms Hendon said.

“They deal with the trauma of the young people they work with every day, and that just makes it all a step harder.

“It does lead to worker burnout, and you want people who have that level of commitment to stay in the system.”

Ms Hendon said the union wanted an additional 200 case workers appointed urgently, and for the department to scrap a list of kids and families who are “monitored” but have no case worker.

“At last count there were 925 open cases, and that can be children or full families.”

Ms Hendon says the department underwent a major restructure 15 years ago after a similar crisis, when limits were placed on how many children a caseworker could be allocated and a formula implemented that automatically saw more resources when the monitored list grew.

“Those outcomes have eroded.

“The demand model didn’t keep up with the real need.

“It’s apparent to our members that the department has normalised having cases unallocated.”

Ms Hendon didn’t back Opposition leader Mia Davies’ call this week for Ms McGurk to resign, saying her members would be happy as long as she took action to address their needs and pointing out that many of the cuts which had created the issue were implemented by the former Barnett Liberal government.

But she said they were frustrated with the lack of action despite repeated meetings with the minister and her department.

“This has resulted in a 28.6 per cent growth in the number of full-time caseworkers since 2017 – a net gain of 201 caseworkers.

“In contrast, the former Liberal-National government increased case worker FTE by just 2.1 per cent (or 12.1 child protection staff) from 2012-2016.

“Average child protection caseloads in WA over the past 12 months have remained well within the agreed limit set out by the Western Australian Industrial Relations Commission and is currently below 10 at 9.40.

“In comparison, in 2016 the average caseload across child protection was 11.88.

“The immediate safety of children always comes first, and there are clear guidelines about the types of cases that can be placed on the monitored list. However, even in that instance they are allocated to a team leader. Communities aims to ensure all children in care have an allocated case worker, but a range of factors such as recruitment, vacancies and unplanned leave can impact on that.

“Like many industries across the country, child protection has been impacted by the skills shortage. We know that is tough on the workforce, but the department is taking proactive steps to fill vacant positions.

“I am aware of child protection workers occasionally taking children home in emergency placement situations, on a voluntary basis.

“They are screened to work with vulnerable children, in addition to holding a Working with Children Check, and are appropriately compensated.

“There is no denying child protection is difficult work. Workers are dealing with some of the most vulnerable members of society. I meet with the union regularly and I’m committed to continuing open and honest discussions with the union and delegates so we can get the best possible outcomes for at-risk children.”