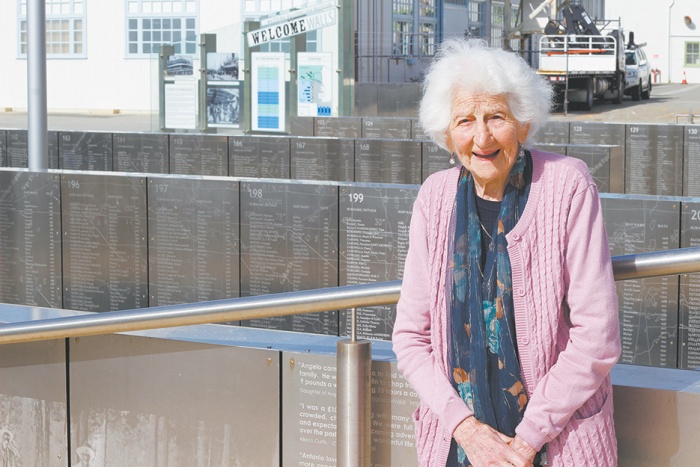 100-year-old Felicia Re is one of the Nonnas whose amazing life stories are being celebrated at the WA Maritime Museum. Photo by Steve Grant

THEY were often the unsung heroes of the Italian pioneers who travelled across the world and gave WA its cosmopolitan flavour; now those young women are being celebrated in their autumn years with an exhibition at the WA Maritime Museum.

The Nonna Project – Journey to a New Life opens next Saturday May 28 and explores the stories of nine extraordinary Nonnas who’ve made a lasting impression on their community.

It’s appropriate the exhibition is being held on Victoria Quay, where most of them first set foot on Australian soil, hopeful of a better future than what they were leaving in war-ravaged Italy, but often completely naive to what awaited them.

Felicia Re is a bit unusual among the nine, having been born on Australian soil and having just turned 100 years old. Her mother had sailed unaccompanied from the small Italian island Lipary just after World War I and arrived in Sydney with only a couple of names of people who’d recently proceeded her.

One of those was a young man running a small shop on Circular Quay and shortly after the pair were married.

Ms Re said the culture shock was profound, from the food to the way of life.

“She said she looked at the jelly and she thought ‘what the hell is that jelly’,” she recalls.

Her mother also had to help out with the shop, which meant heading to the Kirribilly Markets across the harbour – as well as looking after the three kids who arrived over the next three years.

“But she had to go all the way around – there was no harbour bridge – and she started crying the first day.

“So my father said ‘it’s no good crying, you’ve just got to get hold of yourself and do this’.”

This stoicism became a trademark of the Italian women, which exhibition organiser Nella Fitzgerald said was one of the things that attracted her to telling their stories.

Her own mother has a treasure trove of stories, such as walking 100 miles as children to meet Benito Mussolini, only for the dictator who’d been touted as Italy’s saviour not turning up.

“These are the stories my mum would tell me; of my grandmother who was a bootlegger in the US.

“And I thought ‘gosh, I feel humble to have my mother as one of those people that came out with nothing, not knowing,” Ms Fitzgerald said.

“And this is why I feel so privileged to know Felicia and the other Nonnas, because I said to my mum ‘I don’t know how we’re going to do this’ and she said

“And that’s what they’ve all done.”

For Ms Re’s family, life took a harsh turn when her father fell ill and died; the landlord wouldn’t hear of a now mother-of-five taking over the shop where they also lived so she was forced to go househunting while still mourning her husband’s death and later try to earn a small living from doing dressmaking.

A few years later World War II broke out and Ms Re met her future husband Bert (Umberto), who lived in Perth but had signed up to the army and had been posted in Sydney before being shipped off to New Guinea.

But while she was gaining a beau, who wrote to her religiously every week, there was more family tragedy.

“I lost a brother during the war,” Ms Re said.

“June 6 is a holiday in Sydney and the doorbell rang and it’s the postman and he gave me this letter.”

Her initial relief in thinking the letter was alerting the family to her brother being wounded turned to horror when she realised it said “died of wounds”.

“My mother had gone to see her comare (something like a godparent) up the street and she was so happy and I had to tell her that … that was the hardest thing”.

The romance with Bert was blossoming via letter, but Ms Re refused to leave her widowed mother on spec and made him come across from Perth to get married in Sydney.

They took the train across the Nullabor but there were more surprises awaiting her; Bert’s reassurances that there were lots of young nieces at her new home to talk to turned out to be a bit of blarney – they had to share the modest cottage with his parents and six of his 10 brothers. The nieces were all too busy raising families and working to hang out much.

But Ms Re said she was warmly embraced by the family and while Bert earned a decent living as a French polisher their own family grew until they found their own house a few years later.

There was one more shock left for her, but it became a defining moment for the family – and for Perth.

“So then my husband came home and he said he bought a butcher shop … he’d never seen a pig and he had to go to the market to pick the pigs out.”

It was a tough call, but the furniture polish was ruining his hands and Bert was determined – even the front room of the family home was co-opted when it was time to dry the sausages.

Re Butchers in Mt Hawthorn became one of the first continental smallgoods producers in Perth. As the kids grew up it became B Re & Sons, who still carry the name and operate out of bigger premises in Malaga.

“So he kept making these sausages until he was 93 – he was a hard worker,” Ms Re says.

The butchers became an important hub for the Italian community, which by now was well established in WA and had made a mark by transforming its fishing industry.

The Nonnas Project opens at the WA Maritime Museum on Saturday May 28 and runs until September 4.