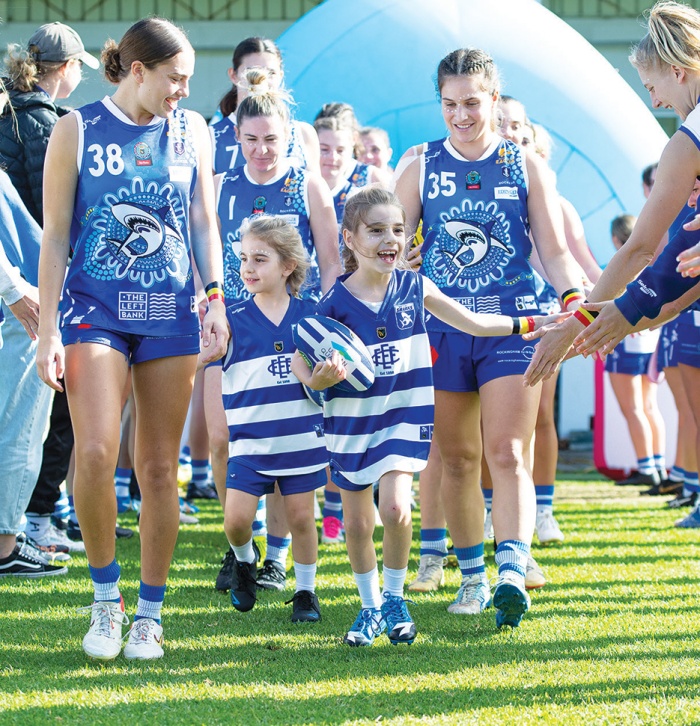 Ariella (with the biggest smile) runs out onto the WACA with the East Fremantle Football Club women’s team.

THE East Fremantle Football Club weren’t just kicking goals to get top of the ladder when they ran out for their first home game at the WACA last month.

Apart from demolishing Subi 90 – 46, the Sharks helped raise awareness and top up the coffers of a foundation that supports people with a rare genetic condition.

Joining the women’s team’s run out onto the field was seven-year-old Ariella Italiano, who suffers from the TBC1D24 Mutation; it’s so rare only 120 or so people are diagnosed worldwide each year.

According to the TBC1D24 Foundation, mutations in the TBC1D24 gene can cause individuals to have epilepsy, deafness, shortened nails, fingers, and toes.

It may also cause (low muscle tone) and developmental delays in babies and toddlers. If delays persist into teenage years and adulthood, then intellectual disabilities may be present.

The foundation has only been running a little over two years, but fundraising efforts are starting to pick up; it’s almost hit the $50,000 mark just months after clicking over $20,000.

A good part of that was the $9000 the Sharks added to the tally.

Ariella’s mum Brooke Italiano was thrilled by the support from the footy club.

“Our family is overwhelmed with the love and support shown from the East Fremantle men’s and women’s club,” Ms Italiano said.

“Last year was the first year we did ‘The A Team’ game and raised $1,700 so the result following this year’s round was a huge result.”

On one of the foundation’s blog posts, Ms Italiano described the impact Ariella’s life, in this case when the family’s home has been transformed into a Princess wonderland for her birthday party.

“She wakes up Saturday morning, with a slight cold, and her body shuts down. We bring her out to see the balloons, posters, cakes, flowers … but all she can do is cry … can’t walk, or talk… or smile… just cry. So she went back to bed.”

Ariella slept through most of the party, but was able to come out to hear family and friends sing Happy Birthday. It was much the same for a friend’s party next day.

“She got 45 minutes of joy out of a whole weekend I had planned just for her,” Ms Italiano said.

“Every little detail was just for her … the Pinterest sweets, the Snow White cake, the princess cupcakes….”

Ms Italiano said initially the ruined weekend made her angry, but later lying next to Ariella she felt a new emotion: Gratefulness.

“I look at her and I think about all of the families we know that have lost their children to this disorder.

“She had friends and family around her who love her on her good and bad days.”

Sharks CEO Todd Shimmon said it was important for the club to get behind Ariella.

“The A-Team Match is more than just a game,” he said.

“Ariella is one of the Shark’s biggest fans, and this match is our way of showing her the support and love she always gives to us.”

To find out more about TBC1D24 Mutation head to http://www.tbc1d24foundation. com/