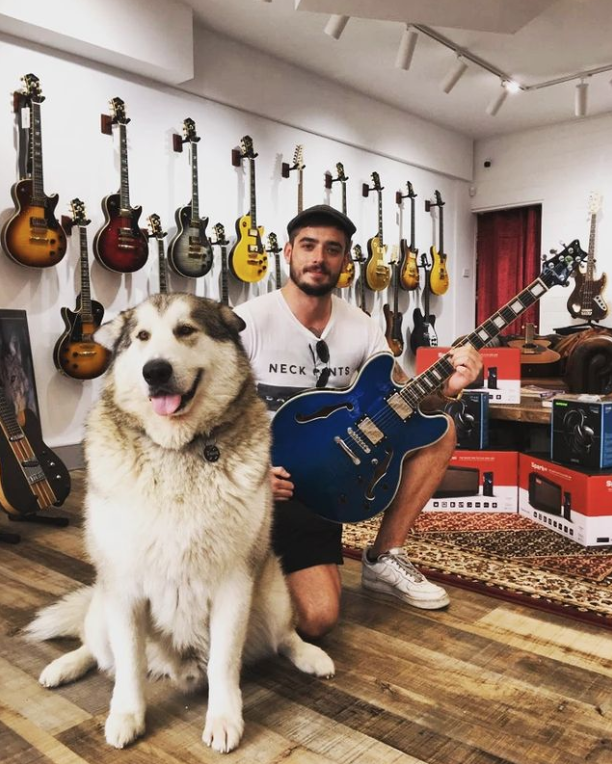 COULD Freo Guitars be the first ever boutique guitar store in the port city?

Situated on Quarry Street, it had a soft opening last month, making the family-owned business the only dedicated guitar shop in Fremantle’s city centre.

Specialising in high-end but affordable guitars, the store was the brainchild of co-founder Peter McCallum, who works as an emergency medical officer at a Pilbara mine site.

He was looking for a guitar to take up to the mines to play during his downtime, and after some research bought two Wolf Guitars.

He liked them so much he opened Freo Guitars and made the Wolf Guitars Australia range exclusive to the store.

McCallum says the brand was inspired by a beautiful mutt that wanders about Freo.

“A visit to our store will result in you meeting ‘The Wolf of Quarry Street’,” McCallum says. “His name is Tahoe or as we say Guitahoe – The Bringer of Joy – an Alaskan Malamute who makes regular appearances at Freo Guitars and other venues in Fremantle to the delight of people that he meets every day,”

“Tahoe is the inspiration for the Wolf Guitars Australia brand.”

The store also stocks Andrew White acoustic and semi-acoustic guitars, basses and provide a full setup and repair service from a team of in-store luthiers.

“Freo Guitars is a self-funded, family owned guitar showroom and retail store under the direction of Erica Buckley that strives to offer customers a new experience, where every guitar in our store is lovingly treated to a pro-luthier setup by a very talented and very experienced luthier Adam Brown, known by many of Perth’s music community as ‘Strummer Brown’ or ‘Strummers’,” McCallum says.

“Adam and his team of luthiers and guitar technicians are committed to excellence in their craft with two of his team Connor Hart and Luka being students in the WAAPA music program.

“All instruments that leave our store are truly gig-ready, reliable and dressed to thrill. Strummers at Freo Guitars also offer repairs, setups, re-strings, customisation and modification for all of your stringed instruments.”

As well as a nice range of amplifiers, some vintage, and other guitar equipment, the store has a few surprises up its sleeve.

“Of particular note are the Howlin Wolf custom humbucking pickups we have made to our specifications,” says McCallum, who used to work at the old Premier Music Centre on Holdsworth Street.

“Overwound, super-high output components that unleash all the howling, snarling, screaming, growling, crunchy goodness that serious and not so serious guitarists are forever seeking. When dialled back these same pickups deliver songbird-like, melodic chime, warmth and clarity with plenty of headroom.

“In keeping with Fremantle’s eclectic nature, we are also producing some special, hand-painted effects pedals that are sure to be a talking point after a gig. We love to shake things up a bit.”

Word is already spreading amongst musicians about the store and singer/guitarist Michael Vdelli, soon to play in Fremantle with George Thorogood, came down for a visit, as did New Zealand band L.A.B when they were in town. “In addition to the Wolf Guitars Australia models, a new range of Altered Beasts is being created,” McCallum says.

“The Werewolf/Lycan range featuring steroidal-level upgrades with mad scientist, progressive, exciting materials and engineering by our resident lunatic Pete under the watchful eye of Adam Strummer Brown and his wonderful team.”

Aside from all the fancy gear, the store also stocks regular guitar accessories like strings and also offer guitar lessons.

Oh, and it’s got pretty cool Austin Powers-style furniture too.

McCallum says the shop is open, but they are planning an official launch party at the end of September/October.