Daryl McCormack and Emma Thompson in Good Luck to You, Leo Grande.

Good Luck to you, Leo Grande

EMMA THOMPSON must win an award for her vulnerable portrayal of Nancy Stokes, a prim and proper ex-school teacher of religious studies in Good Luck to You, Leo Grande.

Written by Katy Brand and directed by Sophie Hyde, this movie shows the complexity of expectations when hiring a sex worker and the hopes of some excitement verses reality of female, middle-age insecurities.

Neurotic Nancy meets with laid-back Leo Grande (Daryl McCormack) a young good-looking sex worker she hired to provide some sexual excitement after only ever having a monotonous sex life with her now-deceased husband.

Filmed mostly in the hotel room where the mini bar provides the courage in liquid form, and armed with a list of sexual desires to follow, Leo tries to encourage Nancy to release her nervousness and insecurity, which creates some laughter from the mostly female audience.

One finds the strain of Nancy’s neurosis taxing and hoping Leo’s personality will calm her down.

Nancy almost destroys this developing friendship with some old fashioned snooping when she tries to find out who the real Leo is. While waitress Becky (Isabella Laughland) an ex-student, recognises Nancy in the hotel, providing some amusement when introduced to Leo and once truths are told. Letting go of women’s intrinsic perceptions of their bodies is liberating when all is revealed by the new Nancy, making this movie worth watching to the end. 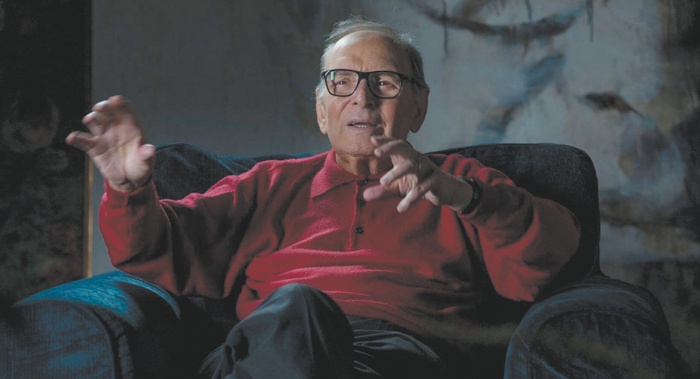 Ennio Morricone composed the music for A Fistful of Dollars.

If ever there was a movie to tug at the heart strings and get you downloading classic film soundtracks to your music list, it’s Ennio – the Maestro, a beautiful documentary about legendary Italian composer Ennio Morricone.

Think of the classic soundtrack from The Good, the Bad and the Ugly with Clint Eastwood or the haunting panpipes in the movie The Mission with Jeremy Irons and Robert De Niro. There you have the magic of Morricone.

Director Guiseppe Tornatore brings together a legion of directors, composers and songwriters who worked with the genius Morricone throughout his life until the end in 2020 aged 91, when he was still conducting orchestras.

Beginning with footage from the archives of his life – learning the trumpet on the insistence of his trumpet-playing father, his foray into composition school – to the original music of more than 400 scores for television and movies.

This doco makes you want to get into Morricone’s mind to see how it worked, as he visualised music scores, some even before the film was written.

His gift of hearing music in random everyday sounds like a radio being knocked off a table, made this composer a stand-out among his peers.

Creating the music for such greats films as The Bible, A Fistful of Dollars, Cinema Paradiso, Once upon a time in America and who could forget, what is considered the greatest score, The Mission.

Morricone’s original music brings tears to your eyes with such sensual beauty, it is hard to think of another composer with such brilliance to mix it up, away from classic compositions.

His ability to bring three music scores together, played at the same time, in The Mission, shows the complexity that comes from a few chords played on the piano to his vision for the film score.