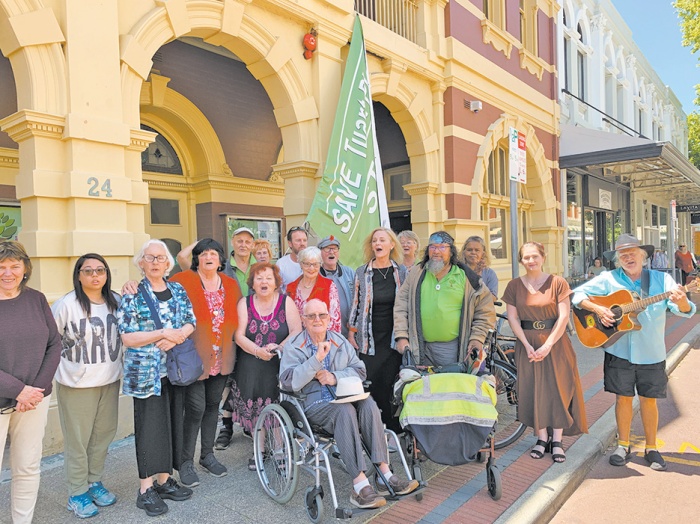 Dr Philippa White (black dress) and Tuart Place clients and supporters celebrate taking their “save us” sign down from the High Street home after being offered a two-year lease extension. Photo by Steve Grant.

TUART PLACE has been offered a two-year extension of its lease on High Street.

The service was facing eviction by the Christian Brothers, who have been off-loading assets because of mounting compensation claims in WA from people who were abused under its care – many of them Tuart Place clients.

It prompted a big rally of supporters in October who gathered under a giant banner reading “Save Tuart Place”, but director Philippa White said they were “jubilant” about being able to take it down this week.

Dr White told the Herald they were offered a two-year extension by the Brothers’ offshoot the Edmund Rice Community Services, which would give them time to plan a long-term strategy.

She said they’d met with ERCS’s chair Helen Mahoney when the offer was made, and it will go before the organisation’s board on November 28 before negotiations about rent or any other conditions begin.

Dr White was hopeful Tuart Place might help ERCS rent out rooms on the top floor to provide additional income from the building. They were previously rented out to Notre Dame university’s international students pre-Covid, but are now in need of renovation.

“The threat of losing their premises has been time-consuming, but worse, deeply upsetting for their clients who feel retraumatised and insulted by the Christian Brothers’ approach,” Ms McGurk told the Herald.

“If there is a silver lining of this upheaval, it has shown Tuart Place has many friends who I have no doubt will be prepared to fight for them again if an agreed outcome cannot be reached.”