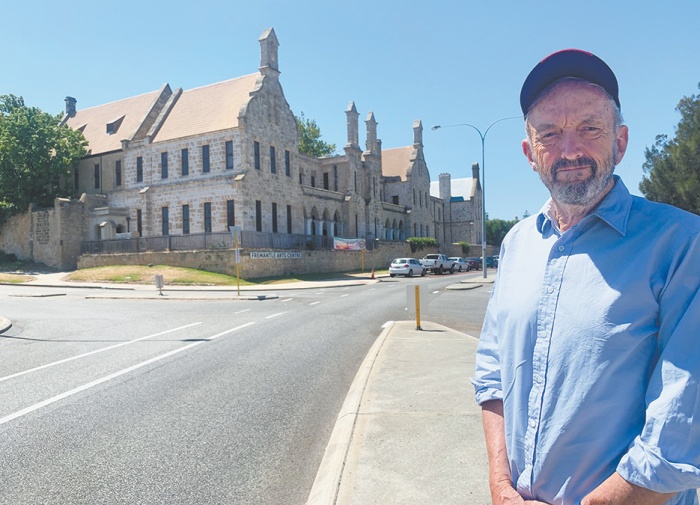 PLANS to replace old shingles on the Fremantle Arts Centre’s roof with shiny sheet metal could undermine a long-held dream to see it included in a World Heritage listing, says the Fremantle Society.

In December Fremantle council appointed tenderer Budo Group to replace the tiles, which were an asbestos cement slate developed in the 1970s by architect Rob Campbell because of the difficulty in replicating the original sheoak ones.

Much of the building’s rear has already been clad in galvanised steel, but society president John Dowson said more of the same along Ord Street, where it will be most visible to passing traffic, was inappropriate and “horrible”.

Mr Dowson acknowledged the McGowan government’s ban on logging native forests meant it was unlikely the centre would ever get sheoak again, but says the council should take a leaf out of Mr Campbell’s book and look for sympathetic alternatives; even raising recycled plastic shingles as a possibility.

“If Rob Campbell could invent that – I mean, it sat there for 50 years and shingles are supposed to last only 30.”

The council updated the arts centre’s conservation management plan last year which recommended re-roofing the asbestos slate area to match the galvanised sections “until such time as the next iteration of roof replacement is contemplated”.

But UWA School of Design senior lecturer Ingrid van Bremen had questioned the conservation plan’s approach to roofing during the submission period.

“The question of appropriate roofing material has not been tackled…” Dr van Bremen wrote.

The conservation plan noted a possible world heritage listing had been knocked back in 2008, but says a push to get the arts centre included in the national heritage listing of the Fremantle Prison or in its own right “warrants a further examination”.

Mr Dowson agrees with that assessment, saying prisoners were known to walk down from the prison to the former lunatic asylum.

A spokesperson from the council said did check out alternatives and spoke with consultants Hocking Heritage and Architecture.

“Whilst the original material was a shingle-roof – it is accepted that this would not be the preferred option as it is prone to leaks, it has a shorter life span and can be damaged in high winds – it is felt to be unsuitable for a coastal location,” the spokesperson said.

“Heritage galvanised steel has been chosen due to its superior waterproofing qualities which will help enhance and protect the heritage building.

“The current roof replacement project is the third and final stage, with previous sections replaced in 2015 and 2016.

“It’s worth noting that the state government’s Department of Planning, Lands and Heritage said the project demonstrated a sound conservation approach and would be a positive outcome from a cultural and heritage significance viewpoint,” the spokesperson said.