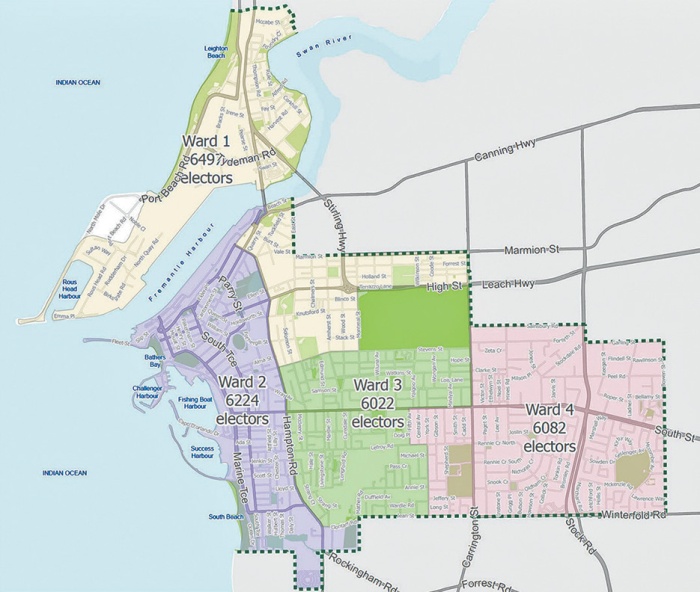 How Fremantle’s new wards will look come the October elections.

THE City of Fremantle will be divided into four wards represented by two councillors under a reform pushed by the McGowan government.

On Wednesday the council voted to adopt the new boundaries, reducing its number of wards from six and the number of councillors from 12 to 8; its popularly-elected mayor will remain.

Only North Ward and East Ward remain in name, though the latter has been shifted and will now cover Hilton, Samson, O’Connor and the south-east section of Beaconsfield – a situation mayor Hannah Fitzhardinge acknowledged might cause some confusion for ratepayers.

A new Coastal Ward will encompass everything west of Hampton Road and Ord Street, while Central Ward is a bit of a dog-leg from Clontarf Hill through to Booyeembara Park and the Royal Fremantle Golf Club.

The bland ward names are likely to be temporary, as Ms Fitzhardinge flagged a review down the track to find something more Freo-specific, with the council’s consultation suggesting Whadjuk Noongar names might be a popular choice.

For this October’s election the council will only reduce to 10 councillors, meaning Coastal and East will have an extra elected member until those positions are phased out in 2025.

Only South Ward councillor Geoff Graham voted against the change, saying it was inevitable the city would ultimately move to a single ward.

“I think it’s only sensible that we go to the one ward; I mean, look at the messing around we’ve had tonight an at a couple of [councillor briefings] to get there,” Cr Graham said.

“The City of Perth do it quite sensibly, I believe,” he said of the capital’s single-ward system.

“Smaller municipalities have been forced into it, so it is the way of the future.”

But colleague Fedele Camarda said having to campaign across the entire city might discourage some people from running.

“It makes it easier to run an election when you’re concentrating on a ward – a smaller area – and that allows for better representation and allows more people to be able to participate in that process.

Ms Fitzhardinge agreed, having campaigned across the city to earn the mayoral robes.

“Having run for the ‘one ward’ myself, I’d say it’s a pretty big undertaking and I wouldn’t want to see everyone who ran for council have to doorknock everything from McCabe Street down to the end of South Fremantle,” Ms Fitzhardinge told the chamber.

A late amendment by staff almost saw Central Ward’s boundaries realigned to reduce the number of ratepayers well below its neighbours.

That was suggested to take into account population growth in the ward through the Heart of Beaconsfield project, but Cr Frank Mofflin captured the mood with his assessment.

“I don’t share the same optimism with regards to the Heart of Beaconsfield development coming on as quickly as might be suggested,” he said.

The council’s adopted wards mirrored the option most favoured by the 50 ratepayers who responded during consultation, though not far behind was keeping the existing six wards, with just one councillor.