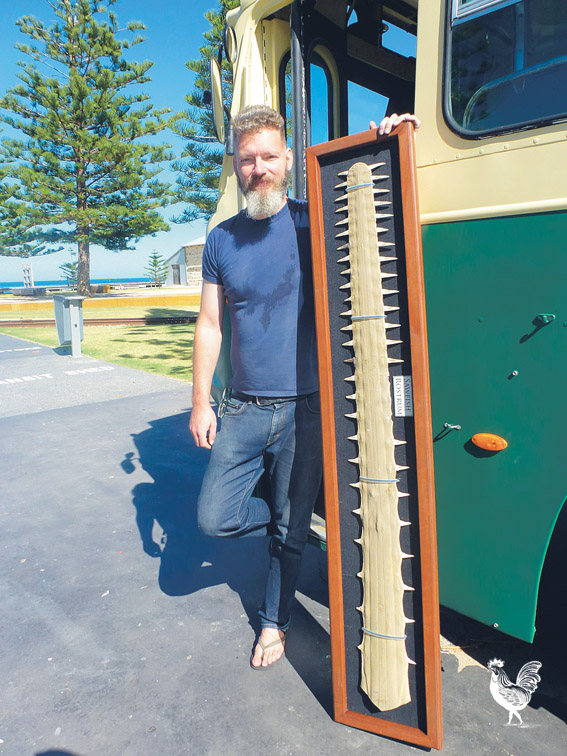 WE’VE had snakes on a plane, now we’ve got sharks on a bus.

Conservationist Paul Sharp hopes the “Shark in a Bus” collection—collected over four decades from waters off WA—will become a permanent summer fixture in Fremantle following the number of people who visited it on Australia Day.

The collection of hundreds of items inside the portable museum includes a 158cm-long rostrum from a 5m sawfish caught in Derby, dolphin vertebrae, sperm whale teeth, shipwreck timbers and harpoons.

But the star of the display is a 4.2m great white caught in a 3.5m dinghy off Albany in 1978. For the record, the blood on its teeth is make-up.

“It’s fantastic to see it back in Fremantle where it used to be on display on a house boat behind Cicerellos,” Mr Sharp says.

“Before that it was on a bus on Mews Road during the America’s Cup.”

Enthusiasts had also wanted to check out the restored MTT bus which was in service from 1957 to 1980, often doing the Stirling Highway run into the city.

“I’m not a fisherman, I’m not a killer,” Mr Sharp told the Herald after packing up the collection at Bathers Bay this week.

“This is about teaching people to look after the ocean.”

He says the collection has historical ties to Fremantle, having exhibited during the 1980s and 1990s.

The Shark in a Bus collection has its origins in the old Cottesloe Oceanarium.

He says Shark in a Bus is looking for support from business to help keep the display on the road.

“One thing that surprised me from talking to people over the weekend was that many recreational fishers don’t understand the risk of mercury poisoning from eating big sharks, they falsely believe they can ‘bleed out the mercury, or soak it out in milk’,” he says.