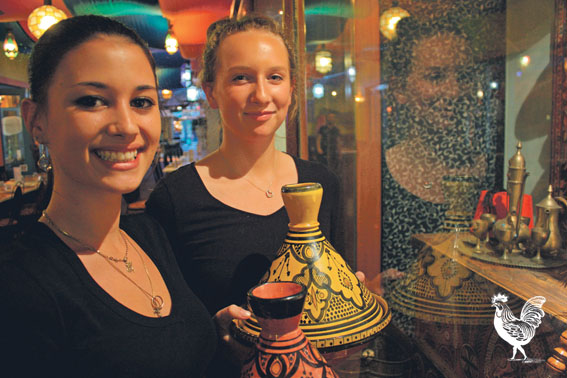 by STEVE GRANT: Casablanca is already synonymous with intrigue thanks to Hollywood, but there’s a modern Moroccan mystery with plot twists to give Rick Blaine a run for his money.

Last year idol-hating Salafists were reported to have destroyed 8000-year-old carvings of a sun deity in Morocco’s Atlas mountains.

News reports of the vandalism were retracted next day when the government assured the world the carvings were safe, apparently taking journalists on a tour to prove it.

Problem is, no journo ever wrote about their tour, let alone provided photographic evidence.

Some archaeologists smell a rat, ridiculing government claims the carvings are simply weathered, when the sole officially released photo shows something more akin to the work of a pickaxe.

Why the government would want to protect cultural vandals is where the twists really start. It’s treading a fine line between placating the Islamic fundamentalists, who showed in Timbuktu what they’re capable of when riled, and the average Moroccan who’s understandably nervous about extremists who keep getting released from gaol after renouncing violence only to go out on suicide bombing runs.

It’s all horribly complex, and a far cry from safe old Fremantle, but the Chook nevertheless has had its own Moroccan intrigue I thought it was time to solve.

A couple of years ago we despatched two interns to review the flash Kaza Blanca just off the cappuccino strip.

They had great things to say about the place, from its lush interior of deep red and mustard yellow textiles to the warmth of the service, but they had one little niggle—the slow-cooked lamb was a bit dry. That elicited a call from the horrified restaurateur, who assured me it was “impossible” for the lamb to be dry because of how it was prepared, and he laid down a challenge for me to come and check it out myself.

So with warm thoughts in my heart for all decent Moroccans, I thought it time to take him up.

Well, the interior is still gorgeous as ever, with exotic knick-knacks keeping my toddler and I entertained in between courses and the rich fabrics giving the feeling you’ve just stepped out of Fremantle into some North African adventure.

Equally, the service was fast, efficient, knowledgeable and patient—although we were super-early and there weren’t many others vying for attention. In fact, they create such a homely atmosphere that one staff member ever-so-gently chided me for trying to rein in my marauding son too much. After that, they could have served us boiled camel and I’d still have loved them.

For starters we were served the tragically named but utterly delectable foul medamas ($9.50). A broad bean dip, it’s claimed by Egyptians but Moroccans have embraced it as their own. Tougher skins are discarded while the tender inner bean is whizzed up with olive oil and a mix of spices, with cumin comin’ through on top. It’s easy to make it a bit oily or gluggy, but Kaza’s got the consistency perfect, and the taste was tops.

Sitting alongside was the mosaka ($9.50), a delicious African take on the Greek staple, with harissa-laced tomato. Served with fresh bread, both were gobbled with delight, and even the little tacker got stuck in.

I love tajine cooking, although I’ve a tendency to send most of the liquid oozing across the cooktop, so here I was in heaven.

The beef tagjin royal ($29.50) lived up to its title. The beef was tender and juicy, while the dates had just enough body left to survive on a fork before disintegrating in the mouth. The bananas were an unexpected but delicious addition, and I think there was a hint of cinnamon in there as well.

The delicious juices were soaked up by couscous which came with vegetables, aimed at my son more than me. I’d gladly stuff myself with more Moroccan meat than bother with greenery, but you’ve got to set a good example.

And so to the slow-cooked lamb afrah ($29.50)—how did it stack up? Well, I’m afraid the young gals were on the money. It was ever, ever so slightly dry—certainly not enough to grumble about, but noticeable. But that’s all that I could be critical about with the dish—the combination of the prunes and almonds with the lamb was delicious.

We didn’t stay for the belly dancing, which is a shame because I hear it makes for a top night out, but we’ll get there some time.