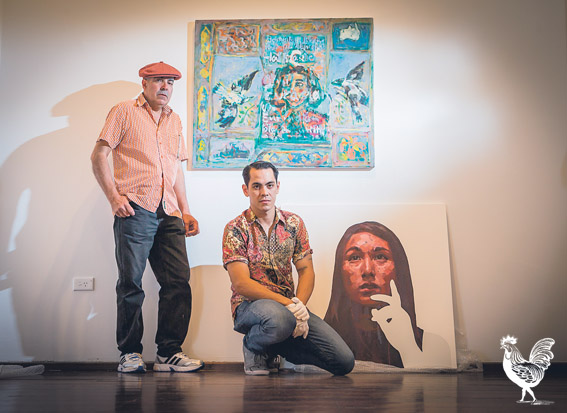 In August 1947, the HMAS Manoora was docked at Fremantle with 700 Anglo-Indians aboard, who’d been rescued from the violence of the sub-continent’s partition into India and Pakistan.

Mr Morgan says despite the Labor government’s “politics of whiteness”, immigration minister Arthur Calwell feared turning away non-white migrants would be an admission the White Australia policy was racist.

“The incident highlights questions of otherness and whiteness for Anglo-Indians, who were out of place in India and sought acceptance by the host community of white Australia,” Morgan said. “White Australia was also lauded as a land of peace, stability and freedom—so there was a great dose of denial embedded in this ideal.

“The arrival of the Manoora was a well-publicised event and for minister Caldwell, it was a way of rescuing ‘Australians and British people of pure European descent’.

“Anglo-Indians, as Christians, were not targeted in the post-partition violence—they drove the trains that arrived in railway stations with cargos of butchered Muslims and Hindus.”

The author of Illegal Action and The Significance of Diaspora Politics in the Visual Arts says any plans by officials to turn the boat around were quickly scuttled by a telegram from the High Commission in Delhi inquiring about rumours the refugees wouldn’t be allowed in.

“The cable is telling since it provides an insight into the paranoia concerning whiteness and mixed-race communities—it also is reiterated today in the current government’s (election-winning) slogan ‘Stop the Boats’ and ‘Turn Back the Boats’,” Morgan said.

Born in the UK of Anglo-Indian parents, Morgan has also captured the arrival of the migrants in his paintings, Being Eurasian.

He shares the show with two-time Archibald Prize finalist Abdul Abdullah. It runs at the Fremantle Arts Centre from November 23 to January 19.

Morgan says he’d pored over archival images and newsreels for inspiration for his paintings which explore race, diaspora, migration and whiteness.

“I was taken by the disembarkation of passengers and the gaze of its sailors, which I have used in a couple of works,” he says. “There is plenty of historical White Australia material on the web and I made some use of this material for context.

“I use oil on canvas and was fascinated by the narrative—my work is painterly in nature so is not purely descriptive of the events and hopefully is about exciting image-making,” Morgan said.

Despite Gough Whitlam’s dismantling of the White Australia policy in 1973, Morgan says Australia still struggles to welcome refugees who seek to escape conflict.

“We are not in the ‘bad’ old days, however there has been countless studies on racism to show it is alive and well—Muslims and asylum seekers are the latest to be scape-goated so we have a long way to go.”