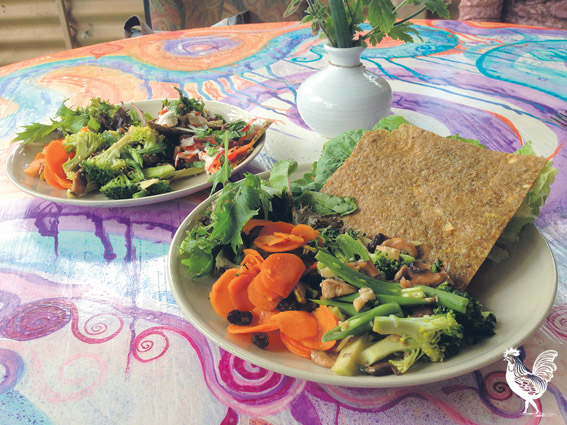 I’M still not sure whether FERN’S cafe is called Heaven or if it’s just an aspiration that hangs above the counter.

FERN’s website refers to it as Raw Cafe, it’s listed as Heaven by one online reviewer, and my hand-written “receet”—sans ABN but brightened up with a smiley face—reckons it’s simply Fern Cafe.

You won’t find any battered sausage in this makeshift kitchen, as every dish has a 42C cut-off to avoid enzymes breaking down and beneficial bacteria carking it. That’s pretty hard-core, as some raw foodies are known to tempt fate (and a dose of glycotoxins) by giving veges a veritable roasting at 49C.

We started with a round of smoothies ($8 each). The clear winner (for obvious reasons) was the chocolate banana. Made with almond milk, raw cacao, banana and vanilla, it was creamy, sweet and delicious. Parents, ditch the McDonald’s and get your kids hooked on these. They’ll thank you—one day.

The protein smoothie, apart from tasting beautifully fruity, was great for an afternoon energy kick, being pumped full of hemp protein, vanilla, almonds, banana and dates.

My green smoothie, which promised much with a mix of kale, lemon, apple and banana, came without the banana: “That’s one for a devoted and brave juicer,” was my mother-in-law’s verdict as she peeled her puckered lips from her gums and massaged them back into shape. I was a little more forgiving, as I’ve stretched a few smoothie boundaries trying to sneak greenery into my little tyke’s diet, but yep, a bit of banana would have mitigated that lemon.

The salad plate ($12) came with “magical” flax bread—actually, no it was “superb”—wait, it was “amazing”. Take your pick. The salad itself was inventive with vegetables marinated in exotic tastes.

“What I appreciated was the overall freshness, but more care could have been taken to take out the yellowed land cress,” was M-i-L’s only gripe. She’s a pretty hardcore health nut, so the cafe’s done well to make her consider return trips.

The zoom burger ($14) was a variation on the theme, with the crispy bread covering more gorgeous salad. Like my pizza and salad ($14) this came with some of the yummiest pistachios I’ve ever eaten, thanks to their marinade.

Again the mix of vegies made every mouthful a treat and everything was beautifully fresh.

There was a little confusion over what desserts were available, and we ranged from not having any blueberry cheesecake available to having a surfeit. The service can be a bit like that—mid-ordering, our pleasant but not-quite-so-attendant staffer turned to give some instruction to the kitchen and missed an entire dish. But they were quick to apologise and quick to produce it.

Eventually, we went for just one slice of the blueberry cheesecake and one of its mango cousin, and some key lime pie just for good measure (all $8).

Have to say, they were the second-best dairy-free cheesecakes I’ve eaten (the best was by a real gun who pioneered raw eating in Perth years ago). Often I find vegan cheesecakes stray towards a hardened slushie, but Fern’s crew managed to keep them creamy, with the flavours just strong enough to kick in without making it too sweet.

The lime pie was tropically divine, the citrus a perfect foil to the coconut which gives it the texture. Nine out of 10.

Although Fern has a well-earned reputation as Camp Alternative (it’s no coincidence the tree-perchers of Forest Rescue are based there) when we arrived there was no dreadlocks nor Thai fishermen’s pants to be seen, just a mix of casual youngsters and laid-back middle-agers.

They’ve got a top sandpit for kids and lots of ephemera (read trashed bikes) to keep them interested, and the soil’s been tended so carefully that if you stay long enough you’ll probably start sprouting.

Fabulous food, hippy pricing, jungle seating and you can even feed your soul by volunteering for a range of community projects—why, it’s practically heaven.