LAUNCHED a decade ago as a benchmark for social housing, the Cold Stores in Fremantle has become another Homeswest enclave plagued by drugs and anti-social behaviour, say residents.

One woman told the Herald things were so bad a while back her young daughter stumbled across a pool of blood left behind by a stabbing in their driveway.

Apart from internal problems at the complex, the woman says Queen Victoria Street more generally has become a magnet for drug users who throw used syringes on porches, defecate in the bin enclosure and fight at all hours.

“I feel sorry for the people who bought there,” she says, nodding towards the almost-finished QV11 apartments near Parry Street. Fremantle council is hoping the five-storey development will spark a renaissance in the East End.

“After paying all that money, if they knew what happened around here they probably would wish they hadn’t,” the woman told the Herald.

She’s had people jump her back fence to steal her daughter’s clothes from the line, which she can’t afford. Pleas for better security fall on deaf ears at Homeswest.

Another neighbour is fed up with messy tenants who let garbage spill out the Cold Stores’ skip bin. For 10 years she’s tidied it up but has had enough.

“I’m not going to do it anymore because a lot of the tenants don’t give a shit,” she told the Herald. “This is beyond a joke, and Homeswest says it can’t be expected to change people’s attitude.”

But the complex’s bin service seems designed to fail: just one skip services the entire block, and to get rubbish in, tenants must turf it through holes in the lid, about 1.5m off the ground. 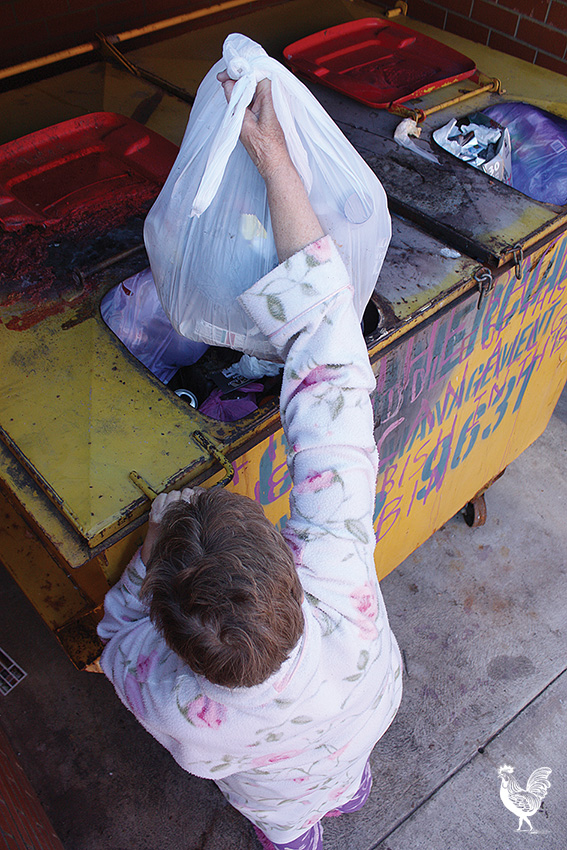 • Mrs Mac has had enough of untidy neighbours and won’t be cleaning up their mess any longer. Photo by Steve Grant

It quickly fills up at the front and to get rubbish into the back a heavy metal lid has to be lifted up.

Mrs Mac says many in the complex are elderly and can barely lift their arms above their shoulders, even when they’re not lugging a bag of rubbish.

The poor bloke who lives closest to the bin can’t use it at all because he’s in a wheelchair.

Mrs Mac says many bags get left on the lid and end up spilled on the ground because the council contractor doesn’t consider it his job to clean them up if they break when he’s collecting the skip.

“It really stinks; this is a health issue,” she says.

Homewest general manager Greg Cash says the department will discuss the issue with the council.

But he denies the women’s claims living conditions have declined in the past three years, saying it is still a high-quality development.

“The Department of Housing manages 99 tenancies in the complex, the vast majority of which meet their obligation to respect their neighbours,” he says.

“The department has not been advised of anyone being stabbed in the car park at the Cold Stores.”

Mr Cash says contractors clean all common areas twice a week and notify the department if there’s a build-up of rubbish.

He’d thought SMYL was doing the right thing turning a blind eye to people sleeping in a bus on its premises, but says workers became increasingly concerned by the level of substance abuse and anti-social behaviour.