DAVID Kane use to be the ideas man for a boutique Fremantle marketing company, then he had a really good idea of his own and started up Suppa Club.

But juggling two jobs became too big a spoonful to swallow, so the Coogee local quit his marketing day job.

“I got to the point I was putting so much time and energy into Suppa Club,” he says.

“It wasn’t realistic to be up all night cooking for the markets and then doing the day job.”

Suppa Club is a small company making boutique soups that nourish the tummy and the local community.

But Kane has grand plans for his business.

“My goal is to build a global company built on sustainable principals,” he says.

The soups are sold in recyclable jars, not cheap plastic tubs:

“People can bring them back to the market.

People who buy at the shop are bringing them back too.”

Mr Kane says that if sales continue to rise he will round up local retirees to help in the kitchen.

“They may be retired, but often are wonderful cooks!”

Suppa Club was launched just over a year ago, and despite tough economic times, it’s gone from strength-to-strength.

“[By] not borrowing from the bank and keeping profits as lean as possible, everything goes back into the business,” Kane says.

Not quite everything: last year more than a thousand litres of soup was donated to local homeless charities.

“[Feeding] more than 500 people in our community and putting smiles on faces and warm fuzzy feelings in tummies,” he says.

“The English took the word soup from that,” explains Kane. 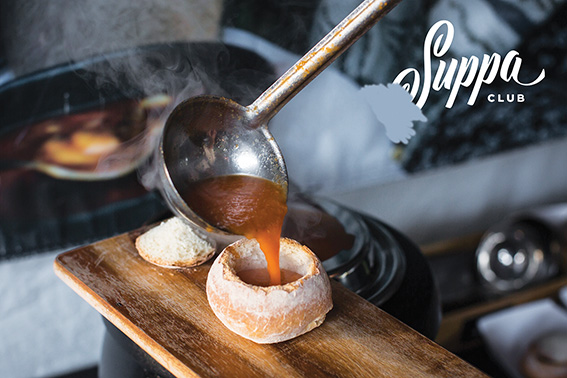 A friend and I tried a couple of his soups at the South Fremantle Growers Market last winter, including a vegan pumpkin and coconut and the Hungarian beef goulash.

Both were rich and hearty with great flavours, and were served in a cup or in a bread roll.

Sales are slow over summer, so Kane introduced cold soups, including an apple pie soup, and a strawberry and rhubarb concoction, “Which is similar to a smoothy — pour it in a bowl and you can have it hot or cold,” he says.

People are also discovering his soups make a great “stock” for other dishes.

To find out where you can get the soup, or to buy on line, go to http://www.suppaclub.com