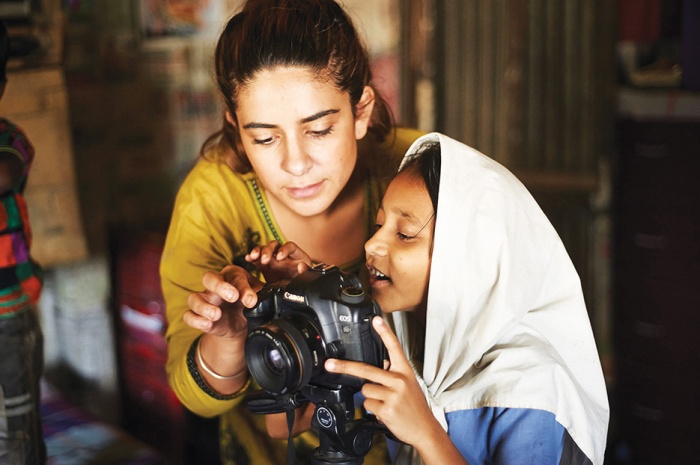 • Sarah Landro helps a youngster at a camera workshop in Bangladesh.

WILLAGEE often gets a bad rap as one of Perth’s roughest suburbs, but this Harmony Week its kids will focus on their neighbourhood’s good points.

Camera Story, a Perth-based charity that works with young people in under-resourced areas, will be running a photo booth at the Willagee Library in Archibald Street on March 16.

Co-founder Sarah Landro says it will give local families the opportunity to get a professional group photo taken and printed, but it’s much more than just a happy snap.

Ms Landro says getting kids from areas like Willagee to participate in activities such as the photo booth helps build connections with neighbours, which in turn helps strengthen the community.

“The camera opens so many doors for us when we are in underprivileged countries, giving us an opportunity to see countries as we wouldn’t normally see them, giving us the ability to connect to people.

“This was such an empowering tool; it would be great if people who don’t usually have this opportunity were able to show their world to others through this form of viewing.”

It’s not the first time Camera Story has worked with the library, having been invited to hold a 10-week photography course with local youngsters which culminated in the creatively-titled exhibition Young Thugs.

Ms Landro says the experience helped the library build a relationship with local kids, helping turn around what had been a hotspot of anti-social behaviour.

“The Willagee library has created a safe space after school for the local community; children choose to go to this library after school,” she said.

In turn the kids helped gain practical skills, gained confidence and learned to communicate more effectively about the social issues around them.

The pop-up photo booth, multicultural performances and other activities will be held from 9am to midday at the Willagee Library.

Other Harmony Week events in Melville include a Choir4Kids performance and afternoon tea on Thursday March 21 from 4-5pm at the Bull Creek Library, and a Making Music Together concert including Chinese opera, Indian music and a demonstration of Chinese Baduanjin at the Bull Creek Community Centre earlier in the day from 10am to 5pm.

There was also a Noongar  tucker workshop, but that sold out.