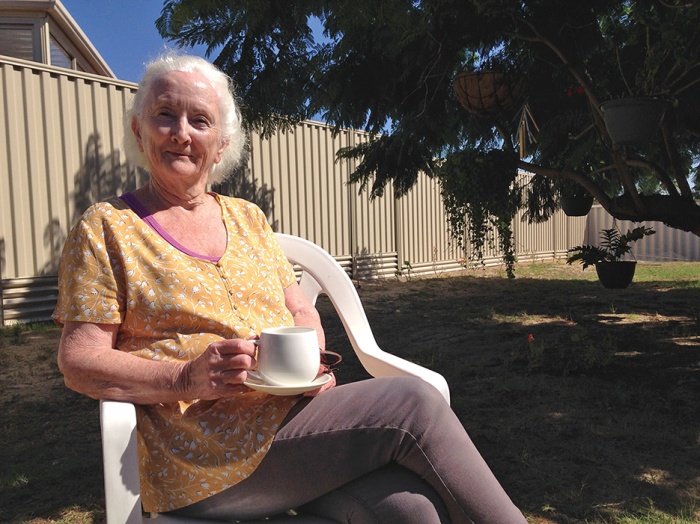 • Nola McDermott says it’s wonderful to be able to relax with a cuppa and a bit of privacy in her backyard after her 25-year fence battle. Photo by Steve Grant

A WINTHROP retiree who endured a 25-year battle over a dividing fence wants local councils to step in and police border disputes.

Nola McDermott says the emotional toll on homeowners trying to protect their properties is little recognised, but her mental health and family relationships suffered.

The dispute dates back to December 14, 1993 when one of Ms McDermott’s neighbours pulled down the fence between their properties without warning.

Furious, she contact Melville council which sent out a compliance officer to investigate the matter. He spoke at length with her neighbour, who it turns out wanted to put a retaining wall on Ms McDermott’s side.

“He was there for so long I was about to call the council again to find out what was going on, when he came back and said ‘you don’t need that land’ and told the contractor he could keep going; I could not believe it,” Mr McDermott said.

She refused to let the contractor on her land and the dispute dragged on; at one point she claims to have been threatened with having her throat cut, which she reported to the police without pressing for charges to be laid.

Ms McDermott became a regular caller and visitor at the council as she sought redress, but says no one was interested in becoming involved. During one meeting, she says a planning officer simply gazed around the room and wouldn’t make eye contact.

“He was not even listening,” she says.

Adding to her misery, her neighbour installed some dodgy fence footings which left exposed concrete on her side of the border and an estate agent told her he she wouldn’t be able to sell up because it breached a covenant on the property.

Feeling trapped, she eventually paid someone to simply rip out the footings then took the neighbours to court, where she won her case.

Ms McDermott says just before the drama started, the council had resolved a similar issue with her other neighbour in a couple of days, and she can’t understand why the two incidents have had such different outcomes.

She’s thrilled to finally have a fence which means she can enjoy a private cuppa in her backyard, but says councils should step up and help homeowners with fence disputes.

Although the Dividing Fences Act is law in WA, it doesn’t do much than help determine who pays when its time to replace an old fence.

It’s silent about what to do when someone unilaterally decides to take a little of their neighbour’s turf.

As Ms McDermott discovered, most councils shrug it off as a “civil matter”, meaning a sometimes expensive trip to court.