Anzac spirit something to strive for

SETON Catholic College year 12 student Richard Thomas will give the keynote address at this year’s RSL City of Cockburn Anzac Youth Parade and Service and says the experience has given him new insight into Australia’s cultural identity.

“I chose to be in the ceremony for a bit of fun, but after reflecting on Anzac Day it has become much more than that,” says Richard.

“Writing the keynote address has changed my perspective on Anzac Day.

“The Anzac legend to me is the force driving our national identity that all Australians should stand behind.

“It’s something to commemorate and cherish as it represented the transformation of this small island dominion into a united federation.

“Our values as a nation were formed on those beaches by volunteers who were not conscripted into the war but joined because they saw a need to stand up for common values and protect what they thought was important.

“To me the Anzac legend represents in many cases a lost identity, lost values we as a country in many ways don’t uphold any more.

“The ideas of getting a fair go, mateship, courage and freedom are values we still need to hold dear.

“Anzac represents much more than a military parade, it marks the formation of our great nation.”

Seton’s history teacher George Lilly says it’s important for students to realise the sacrifices made by people who were often little older than them.

“It helps them to appreciate that we are very fortunate in what we have in Australia and understand that what we love about this country has been hard won and needs to be valued and protected,” Mr Lilly said.

This year Seton, which has been involved in the event for a decade, will have about 60 students participating in the parade and service.

• Seton year 12 student Richard Thomas says writing the Anzac parade keynote address has made him reflect on our values. Photo by Janine Guidera

COCKBURN will commemorate the 104th anniversary of the Gallipoli landing with an emotional RSL Anzac youth parade and service in the city.

The parade, to be be held on Thursday April 11, will assemble at Cockburn council’s civic building on Coleville Crescent at 9.30am.

Under the command of RSL chief marshal Malcolm “Tiny” Small, the parade will proceed along Spearwood Avenue to the RSL Memorial Park, where a wreath laying service will start at 10.20am.

The parade will include the Scotch College Pipe Band, the 10th Light Horse memorial troop and pupils from local schools, including Coogee Primary and Fremantle Christian College.

Cockburn mayor Logan Howlett will make a closing address at the service.

Afterwards there will be water and fruit marquees for students, and special guests and visitors will be invited to the RSL sub-branch, 73 Frederick Road Hamilton Hill, for light refreshments.

The parade and service commemorates the Gallipoli landing on April 25 1915, and those who gave their lives in defence of our country.

The young heroes of war

CHILDREN are often the forgotten heroes of war.

These days Sister Cecilia Salvadori spends her time safe behind the walls of the Ursuline convent in a quiet street in Fremantle, but as a youngster she grew up with the sound of Allied bombs as a backdrop to life in Northern Italy.

“Every night I’d hear the warplanes coming over and I thought sooner or later a bomb was going to drop on us,” she recalls.

“I knew the airplanes were killing people but I couldn’t understand why. I didn’t know what war meant – I was terrified”

In 1943, the Nazis installed a puppet regime in Northern Italy and German soldiers littered the streets.

Sister Cecilia remembers two German soldiers trying to barge into her home while her mother was out shopping.

“I heard them speaking German so I ran upstairs to look through the window and peek down.

I remember this lovely woman, I still pray for her now, that insulted the Germans, closed the door and told them to go away.

“I was so frightened they’d come back.”

Sister Cecilia told the Herald she was more worried about her mother during the war.

“I wasn’t afraid of being killed; I was afraid of living without my mum. If I lost my mum, I’d have lost everything.”

Sister Cecilia immigrated to Australia in 1960, but it wasn’t until she was well into her forties that the childhood trauma began to subside.

She says she happy to call Australia home – “I love Australia. I felt safe here and I still do.

Closer to home, the palpable terror people felt that Japanese troops would invade Australia during the Second World War is hard to imagine these days.

But hundreds of children were evacuated from Perth’s coastal strip to the safety of the hinterland, as this extract from a history of the Sisters of Our Lady of the Missions, who ran the Riverview school in Fremantle, graphically displays.

“In 1942 witht he fall of Malaya and Singapore, and the bombing of Darwin, the school in Tuckfield Street was considered to be in a dangerous position, open to attack.

“Parents began to panic and many wanted to get their children taken to the relative safety of the country.

“The bishop ordered closure of the school and 30 students, boarders and day-scholars, were evacuated to the sisters’ convent in Narrogin.”

Holding up their plans, transport was hard to come by because of the high number of evacuations.

The history revealed that trenches were dug around the schools and convents, and were used on more than one occasion. In one instance on June 10, 1942 the children and nuns spent an hour in the trenches during pouring rain, but the sirens turned out to be a false alarm. Still, the nuns were driven home by the parish priest as they “were not very edifying spectacles” after an hour trying to control the students in the mud. 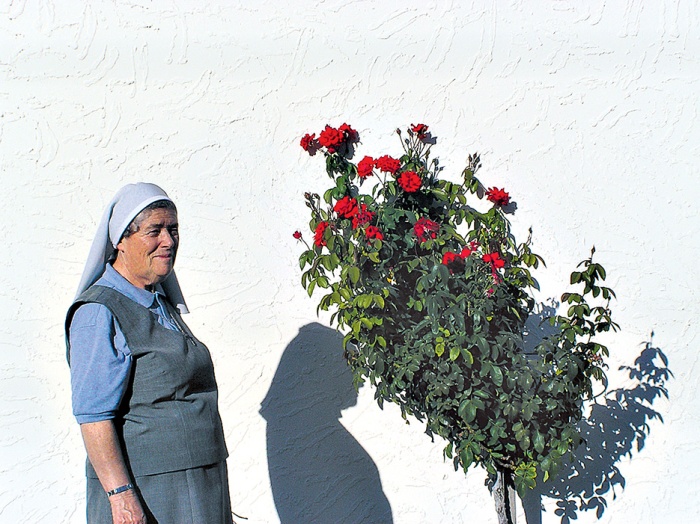 • Life in the convent is much more relaxing for Sister Cecilia than listening to bombs fall on her childhood home: “I was so frightened”.