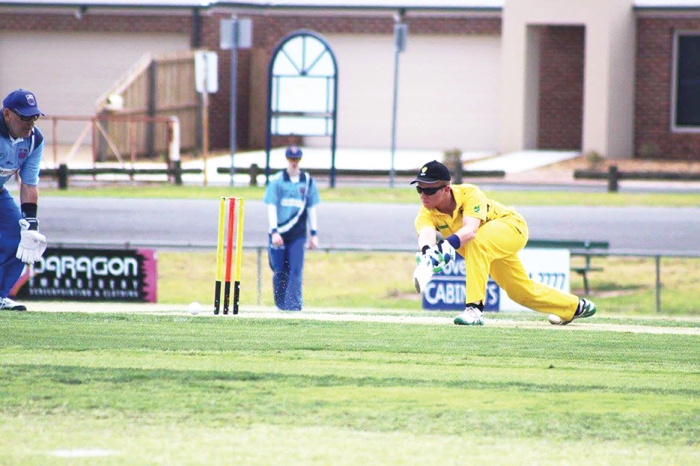 • Steffan Nero sweeps away a ball in a game of blind cricket. Photo supplied

NOTRE Dame University student Steffan Nero has accomplished more at the age of 20 than some will in their lifetime.

And he has done it with congenital nystagmus, a condition that causes involuntary eye movement and limits his vision.

The behavioural science and law student is training to go to Adelaide for the Goalball National Championships, and then he’s off to England, representing Australia in VI Futsal next month.

He also has the National Cricket Championships to look forward to, where he will be “wearing the baggy green” for WA.

“I always have a drive to improve,” Mr Nero says.

“That drive, that hunger, pushes me to get better and better…to improve and develop…but also to be the best person I can be–to be a hard player, but a fair player.”

Mr Nero played soccer as a child, but stopped for a while when his vision declined, before picking it up again later.

He has played Goalball, a team sport designed for athletes with a vision impairment, for nine years and Blind Cricket for five years.

“When I was younger I used to get affected mentally at times”, Mr Nero says.

“I’ve always considered myself a sporty person, it just always clicked for me. It’s about keeping busy, keeping active… being outside in the sun and being with other vision-impaired people”.

Since last year, Mr Nero has also been coaching Goalball.

“Coaching is all about going through the motions: making the players feel comfortable in the environment and slowly getting them used to it. I started when I was very young, so I understand how they’re feeling and thinking. For vision impaired players, you can’t tell them what to do, you have to show them what to do”.

“With the right environment, I think anyone can do it,” says Mr Nero.

“The mantra ‘a sport for all’ is something that Cricket Australia is taking seriously…they have been really good and accommodating just getting the word out about Blind Cricket”.

Mr Nero says there is a sport out there for everyone: “The biggest obstacle is always the first step. But that’s why I hope that all three sports will improve in that regard, and get out there so people will know that they’re available”.