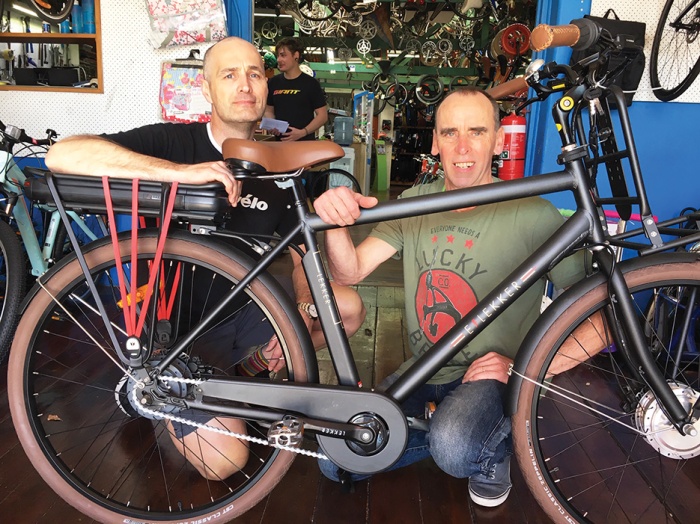 AFTER running Mercer Cycles in Fremantle for 40 years, Clive Mercer is hanging up his cycling cleats and has sold the business.

Mr Mercer’s dad, Geoff, opened the business on South Terrace in 1979, after the family emigrated from the UK.

Clive says he was destined to take it over, because he was pretty much born in the saddle–a bike saddle.

“My parents had a bike shop in the UK and I was born over the shop.”

Clive says it was a sad decision to sell-up after four decades, but on-going heart problems and a few other issues had forced his hand.

“It’s a number of small reasons that added up,” Clive says philosophically.

Wife Sally has been the backbone of the shop when Clive had open-heart surgery a few years ago, but now she’s landed another full-time job and something had to give.

But Clive’s not retiring and he’s on the look out for a new part-time job which is less taxing than running a business seven-days-a-week.

Hands calloused and blackened, bear testament to the skill he’s racked up repairing thousands of bikes over many years, and he reckons finding a new gig won’t be too hard.

“We have always been one of the busiest workshops in Perth because we have a good reputation.”

The heritage-listed shop, formerly a general store, is redolent of chain oil and other mysterious bike-related smells, and aged jarrah floors show years of hard wear.

The new owner Greg Stoyles, who hails from Canada, loves the shop and isn’t planning any major make-overs.

“It’s not broke so why fix it. Mercer’s is iconic–it’s the second oldest bike shop in Perth,” he says.