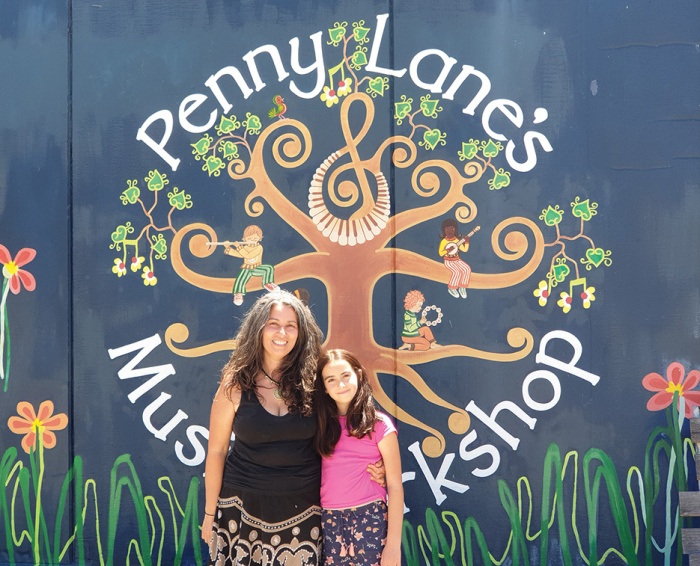 LAUGHTER mingles with the sound of instruments as I approach a midnight blue wall adorned with musical notes and flowers.

I am at Penny Lane’s enchanting music workshop in the old Knutsford industrial zone in Fremantle.

When co-owner Cathy Gavranich moved back to Freo with her partner and baby daughter more than a decade ago, they spotted an empty warehouse across the road.

“There was an opportunity to do something special, rather than do private lessons and teach at home, we saw this big empty space and our minds filled with possibility,” Ms Gavranich says.

“The workshop has been running for over 10 years and we named it after our daughter Penny Lane, who is now 11.”

The music school offers one-on-one and group music lessons for all ages, including a Baba Lala toddler program, Discover Music for pre-schoolers, and classes for children, teens and adults.

Ms Gavranich says children and adults learn best when they are enjoying themselves and engaged, so she tries to create an environment that is colourful, friendly and open.

“Penny Lane focuses on learning music as a way of sharing, rather than in isolation. It’s not about your level or ability, it’s about the fact that music is the way a community celebrates together.”

Ms Gavranich’s partner and co-owner Richard is a professional musician well-known from Aussie bands such as The Stems.

Ms Gavranich says they create a space where parents and siblings can relax and enjoy being at the workshop.

“The funny thing is, sometimes if a child can’t come to their lesson for some reason, we’ve walked out and found their parents and siblings here. The student has stayed home but the family comes here anyway because they love coming here every week,” she says.

“All the classes are casual, so there is no need to book for the whole term, you can rock up, pay as you go and come when you feel ready.

“Often we will have the couch full of grandparents and everyone singing along so the families come when it works for them; that’s something special we’ve not seen anywhere else.”

Ms Gavranich says their approach to teaching is fun-based and children-led.

“Being parents ourselves we understand with children especially, it’s important to follow that feeling when their excitement and interest is there. That’s the time they dive in and get the most from it.”