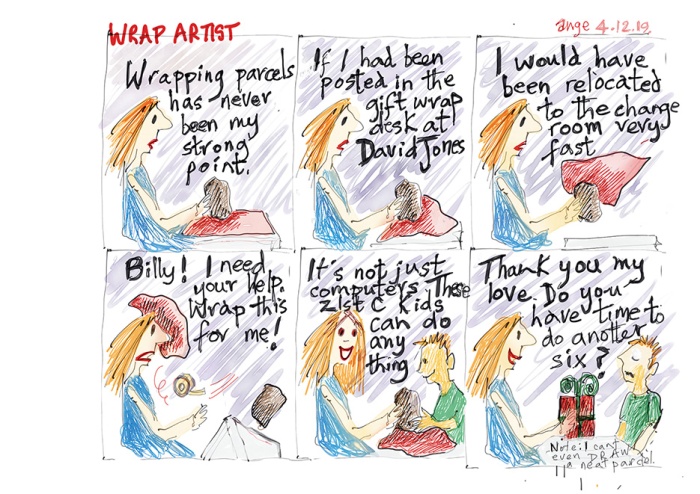 Slick letter
FOR those of us who are undecided, we will all pass a new milestone this year.
If you Google worldwide oil consumption in barrels the new number is 100 million barrels per day.
There are 50US gallons in a barrel and 4.4 litres to a gallon – you do the math. It’s an endless row of zeros.
You cannot see or smell it, but if you stick your exhaust into your car via a hose you have around 20 minutes.
There is a forecast that we will have another billion cars on the road in the next 10 years.
Please wake up, it really is about our kids.
John Paterson
Wood St, White Gum Valley

Thanks, Chook
THANK you for bringing attention to me the all-time low Fremantle council has sunk to by allowing an alleged brothel to run 24/7 in a residential area next to children’s amenities, family restaurants, ice cream shops and a McDonald’s etc.
It’s a shame your readers are not more offended at having to read the smut that is going on in the Fremantle area, and that a man approached a school girl in her uniform outside the alleged brothel, which council is allowing to operate.
Unbelievable that they didn’t put their time and energy into trying to close down the alleged brothel in the Fremantle area, which affects the children in the community, instead of whingeing about the journalism.
Any wonder Fremantle has gone to the gutter.
Name and address supplied

Lazy motorists
IN reference to “Pests put brakes on bus journeys” (Herald, November 23, 2019).
Motorists not using Auburn Grove station for the purpose of bus and travel illegally cut through the station as a short cut between Russell and Wentworth Streets.
The entry/exit lane at Lauderdale Road is for buses only, but motorists fob their nose at it.
The exit into Lauderdale Rd has no left turn sign. Motorists totally ignore the stop sign; giving the finger to bus drivers.
The Public Transport Authority and Transperth say they can’t stop motorists and they don’t want to get involved as its private land.
Name supplied
South Lake

Map wars
THE Victorian government has released a new map aimed at making it as easy as possible for hunters to identify where it’s fine for them to slaughter and maim animals going about their business.
Contrast this with the manufactured rage of our politicians over the existence of Aussie farms’ farm transparency map; a resource that does nothing more than compile publicly available information.
The map indicates where farms are located in an effort, as the site says, “to force transparency on an industry dependent on secrecy”.
Each year in Australia, hundreds of millions of animals are confined, tormented, and slaughtered out of public view – behind high walls or in massive compounds.
Tens of thousands of chickens are kept inside sheds in an atmosphere so toxic that humans entering the premises report having trouble breathing, sows are confined to stalls barely large enough for them to take a single step forward or backwards, and sheep are punched and cut with clippers by shearers paid to work quickly, not carefully.
Any attempt to expose the egregious abuses occurring in these places is met with hand-wringing and rage as well as threats of criminal penalties. Yet a licence and a mobile phone are all that are required for anyone who wants to satiate their bloodlust by taking an expedition into a state forest.
A common theme binds both scenarios: whether it’s disingenuous angst over a map-listing businesses or obsequious facilitation of barbaric slaughter, animals always lose out.
Let’s allow room in the conversation for consideration of their right to live.
Paula Hough
Vice president (Asia-Pacific),
PETA Australia

Freo fire sale?
I RECENTLY visited the ‘drop in’ community information session held at 10 Shuffrey Street Fremantle to view the proposed re-zoning of numbers 7 and 9-15 Quarry Street Fremantle to mixed use with a residential density of R80.
Apart from the re-zoning aspect, I cannot understand how the council can justify the proposed sale of these properties when you consider and account for the following:
• The initial proposal prompted in excess of 50 submissions/objections from residents in the immediate area.
• In the 2019-20 city budget, the net book value of 9-15 Quarry Street is listed as $6,076,000. The proposed sale proceeds would be $1,971,925 resulting in a $4,104,075 loss
• In the case of 7 Quarry Street, the property has a net book value of $3,245,000. The city proposes to sell this property for $2,750,000 resulting in a loss of $495,000
• These properties may be under-performing as one councillor explained, but in a depressed property market, why would council even consider the sale of these or any other of the city’s properties?
If this was viewed in the case of an individual’s property portfolio, one could surmise that the individual was in desperate need of liquid funds.
Is this the case for our city? Has our city overspent on major capital items such as King’s Square?
Can council please explain, even if it’s just to allay the fears of a growing number of ratepayers that our city may be broke and is selling off our assets to bargain-hunting developers.
Peter Scott
Shuffrey Street, Fremantle

Standards
THE article “Brothel fall-out” (Herald, November 16, 2019) appeared to be just an item about a complaint of an alleged brothel operating in a shopping precinct until it got to a quote from a happy customer.
What followed disgusted me to no end. I saw no reason for the grubby words.
Your paper has over-stepped the line of public decency and not for the first time.
I take it the writer of this article is a female, how disappointing.
This edition of the Herald will be the last I will be reading.
Any future papers will go straight into the recycle bin.
Herald reader no more
Bibra Lake

Hot response
RECENTLY we have seen catastrophic bushfires across much of the eastern seaboard and in WA, and heard criticism of the government from the Greens over their failure to act before the fires occurred.
In turn they were criticised for raising the subject at an inappropriate time i.e. as the disaster was happening. So, when is the right time?
Was it in April 2019 when 23 former firefighting leaders approached the government for a hearing about the impending risk?
Was it when distraught victims of the fires expressed their anger and frustration at politicians when they had lost their home?
Should it be next week in parliament? Or should government wait until the fire season is over?
Whether you want to deny climate change, or that humans have any impact on its occurrence or ability to reverse the situation, government has the capacity to mitigate the extent and severity of fires.
Caring for the victims now is paramount, but so is saying what can we do to ensure this doesn’t happen again.
These should not be treated as exclusive events, but inclusive and bi-partisan.
The so called “quiet Australians” want to be able to leave managing the country to parliament, so that they can get on with their lives, but they must also expect that government listen and act without delay.
Inquiries are too often used to defuse concerns and avoid action and this must stop.
It is time quiet Australians spoke out to tell their government that member action is needed.
Have a voice, have a say, otherwise they will not act.
Jim Meckelburg
Davies Street, Beaconsfield

Tribute to Alan
IN reference to the Editor’s reply to Sarah McCarton’s letter (“Unbalanced”, Herald, November 30, 2019), acknowledging the likeable person that the late Mr Alan Sanderson was.
You said that the content of her letter was the kindest thing you had ever heard said about him.
I would like to reaffirm Sarah’s comments. Over 15 years my husband and family have had many interactions with Alan; many times he was definitely under the influence, but he was kind cheerful and interesting company.
Clare and Ian Cheney
Lefroy Road, South Fremantle

Sorry, Simon
YOU cut the pivotal central section of my piece (“Simon goes nuclear,” Herald Thinking Allowed, November 30, 2019) after earlier reassuring me this would not happen.
I would not have published had I known you would do this.
I am saddened and disappointed.
Simon Gevers
The Ed says: Sorry, Simon, we squeezed as much as possible onto the page.  Head to heraldonlinejournal.com and click on the “think” link at the top of the page, they can get the complete piece. It’s worth the read.

Too many…
IT’S a shame that Aidan Holohan did not understand what Daryl Binning was trying to say (“Binning backlash”, Herald Letters, November 16, 2019).
The main cause of the massive loss of rain forests, animal habitat and marine life; land being turned into desert; and the rapid extinction of so many of the planet’s plants and animals can be blamed on just one thing – world overpopulation (not just third-world overpopulation).
The planet’s population has increased from one billion to more than seven billion in just 100 years, take a
second to let that sink in.
So the churches’ methods have not worked.
It is estimated the ideal world population is just one billion.
I quite like the fish and the birds, trees, lakes, rivers and having animals living outside zoos .
Mr Holohan’s God may be happy with a world covered in concrete and the human being the only animal left, but as humans we have a responsibility to protect the only home we have.
Glynn Franche
Reynolds Road, Mount Pleasant