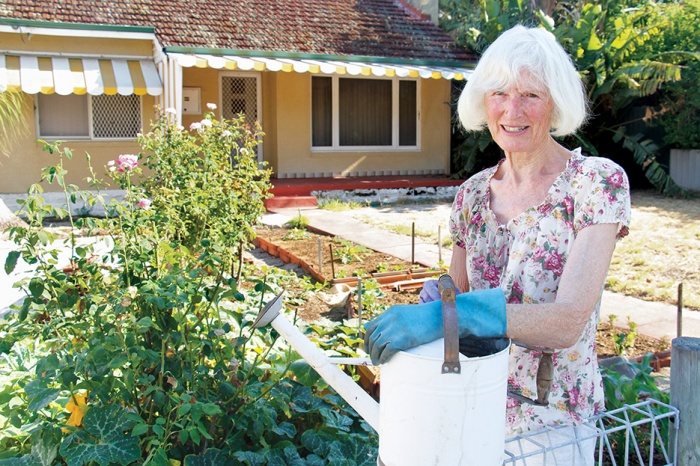 CARLA VAN RAAY is an 81-year-old best-selling author and a keen gardener, who found a novel way to extend her little strip of greenery and get some vegies going. Apart from looking for someone to join in her endeavours, she’s hoping her example can inspire other retirees not to live like vegetables, but to grow them. HAVE YOU GOT A GARDEN THAT INSPIRES YOU? We’d love to hear about it; send us an email at news@fremantleherald.com or give us a call on 9430 7727 and your beautiful sanctuary could be right here.

THIS is a story of how a front yard under kikuyu and oatgrass for 30 years, can be transformed into a productive garden.

My little unit in Willagee provided me with the first spaces to transform.

At the back are beds built at waist height against the fenceline – narrow strips of earth actually turn water hot around the roots of plants at the height of summer.

Three years ago, I happened to be on one of my walks when the perfume of a rose wafted over to me from a front garden.

It was from one single rose on an almost-dead bush. There were three bushes in all – all in the same condition, and I wanted to rescue them.

I knocked on the house’s front door, and the third time around, the gentleman owner of the house and garden was home.

He was delighted that I wanted to take care of the roses, circled by weeds.

“What do you want for that?” he asked, and I said I wanted to pick the roses.

It took a bit to bring them back to health, but I have picked so many beautifully perfumed roses that only for short periods of time have I been without them in my house.

Over time, I extended the weed-free area around the roses. One day, I asked permission to clear a space for growing vegies.

The pumpkin plants I had grown from seeds were spilling their leaves and fruits all over the rosebed and onto the driveway.

To my huge delight, the owner said, “Carla, you can do with my garden whatever you like.”

I took him up on that when FOGO bins came along, which gave me the chance to dig up the weeds, roots and all, and put them in bins which Melville Council would take away for recycling into compost. Hooray!

I filled every available bin in the neighbourhood, and this went on for three weeks of steady hard spade work.

And then, I had a large patch of dead, grey sand to transform. What an exciting prospect.

It was going to cost me some money for the coir that would go in first to better hold the water, the soil improver I thought was a good bet, and then, the ingredient I’ve come to know to make the magic difference: minerals: rock dust plus microbes. Brilliant.

I kept the water up (water is the owner’s generous gift to the project) so that the microbes could do their job uninterruptedly.

I topped each completed bed with pulverised lupin mulch from Nibali in Hammy Hill. It smells lovely and does a great job. And then I waited, because it’s no good putting plants in while the soil isn’t settled enough. Waiting also gave the kikuyu roots I’d missed to show up.

When the moon started to show itself again, I began to plant.

The beds needed a border, however. I saw renovations going on to a house with roof tiles, and before long a stack of requested tiles were kindly delivered.

Now, getting them into the ground was beyond me. That’s when I asked my son-in-law, Steve, to come and help out.

This big-hearted man got them all in on a Sunday morning to make six beds.

The transformation is complete on one side of the front garden.

Plants are in surviving the heat of the sun. When 40 degrees were forecast, I draped shade cloth over the silverbeet seedlings, which were showing heat stress.

The plan is to convert the other side as well. For that, I need a partner, not only to dig up the weeds, but to help create and maintain the beds. Eventually, an investment in reticulation would be a good idea.

I am an 81-year old. I hope my story inspires many retired people to take up the invigorating challenge of using their front yards for growing vegies.