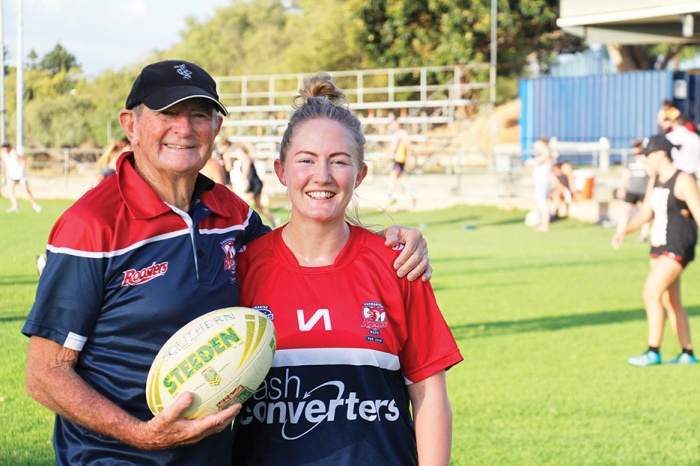 • George Booth and Michelle Traynor say the lack of a WA team in the national rugby competition is blocking pathways for potentially elite athletes. Photo by Steve Grant.

A NEW push for a WA-based rugby league team to join the national competition has been launched from Fremantle.

An online petition has been created to capitalise on the publicity surrounding February’s two-day NRL Nines tournament at HBF Park, secured by the rugby-loving McGowan government.

The new bid for a WA team to replace the axed Western Reds is being spearheaded by Fremantle Rugby League Club patron George Booth, who’s love of the code runs so deep and long his umbilical cord could have attached him to a Steeden.

“I played my first game in 1950,” says Mr Booth, who’s since become a hall of famer and life member of the WA league.”

Mr Booth says last year’s record crowd of 50,000 for a state of origin match in Perth demonstrates there’s enough local passion to support a WA franchise, and he reckons he’s got financial backers ready to put their money into one as soon as it’s offered up.

Former Western Reds sponsor Cash Converters is raring to get back into the NRL.

But it was only in December that Australian Rugby League Commission chair Peter V’landys said he didn’t want to “waste money” trying to expand into a “rusted-on AFL state”.

Mr Booth also scoffed at Mr V’landys’s complaint that constant plane trips to WA would be too onerous on players.

“[He’s] ignoring the fact that some of the most successful Australian sporting teams in the AFL, basketball, soccer and netball are based in Western Australia,” he said.

Michelle Traynor plays and coaches league, flag and touch rugby down at the Roosters’ home ground at Ken Allen Field and says it’s frustrating seeing potentially elite players going to the eastern states clubs because WA’s not in the national scene.

“At this club I can straight off the top of my head name five,” she says of potential stars, adding a handful more have already moved east.

“They play with the boys until they’re 12 years old, and then there’s nothing – we were really getting bogged down.

“If we are not getting that exposure to the higher level, we stop developing.”

She says the situation’s slightly improved with the Roosters strengthening its junior sides, but believes a truly national competition is the only real solution.

“Rugby League in WA started in 1948 in Fremantle at the corner of Market and High Streets in Bernie Silbert’s shoe store,” Mr Booth said.

By Thursday the Change.org petition (search for WA rugby league) had 250 signatures.

“If you’re going to be called a national sport, then there should be a team in every major city,” said signee Laurie Ord.

Mr Booth said fans and families can also get a look at elite rugby league when the Sydney Roosters come to Freo to train at the local club on February 12 and 13, just before the NRL Nines tournament that weekend.