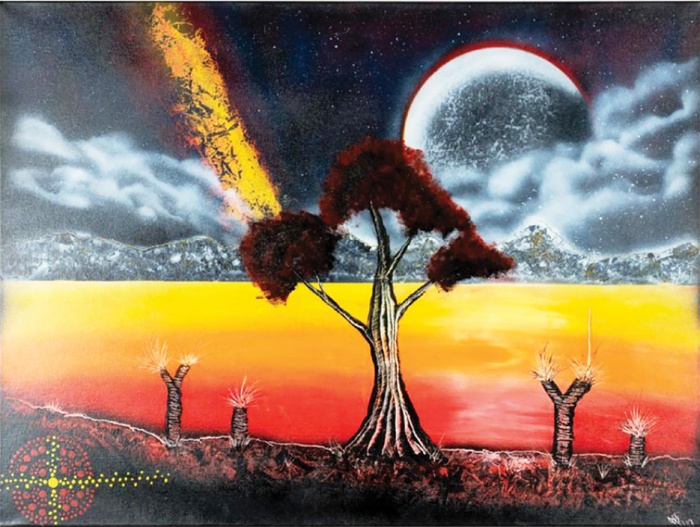 SAMUEL PILOT-KICKETT is one of several emerging Aboriginal WA artists featured in the exhibition Revealed 2020 at the Fremantle Arts centre.

His contemporary art combines the cosmos and WA landscape into something unique and slightly mystical.

Pilot-Kickett uses modern methods in his art, but is influenced by old Aboriginal artists like Lance Chadd and the Carrolup School movement (landscapes mainly drawn by school-aged Aboriginal children who were removed from their families by the government in the 1940s).

“My works are all done with spray paint and it’s all layering,” Pilot-Kickett says.

“I used to be a bit of graffiti guy back in the day and I think this was a natural progression.

“Also, I think it goes back to the old days when my mob would use ochre to spray prints of their hands and other things. My grandmother says that we were landscape artists.

“I love doing this style because it connects me to my past while using modern tools.

“I won the Painting award at the Ellenbrooke Open Arts Awards last year with my first exhibited piece. I’ve only been painting for a couple of years now, but the response to my works has been amazing.”

The talented Perth artist, who has exhibited in Paris and Madrid, is also an actor, renowned didgeridoo player, radio presenter and Nyungah consultant.

In 2017 he won the NAIDOC Perth community person of the year award, after working for urban Aboriginal services for a decade doing community support work through the department of corrective services.

He also helped Good Sammies with their autistic clients and worked with Outcare, helping prisoners re-integrate back into their communities and find meaningful employment.

If that wasn’t enough, he also used to co-host the radio show 2 Norty Broz on 100.9fm Noongar Radio.

Pilot-Kickett is among dozens of WA Aboriginal artists who will feature in the Revealed exhibition at the Fremantle Arts Centre when it reopens its doors on Monday (June 15).

Almost all works in the exhibition are for sale, with 100 per cent of proceeds going directly to WA Aboriginal art centres and artists.

The exhibition was meant to open at FAC in April, but the Covid-19 pandemic forced organisers to temporarily host it online.

“We have sold almost $90,000 worth of work since the online catalogue launched so the response has been amazing,” says FAC communications coordinator Andrea Woods.

“The catalogue has also been viewed all over the world including the US, UK, Ireland, France, NZ, Switzerland, Brazil and many more so it’s been great to extend the reach of WA’s emerging Aboriginal artists.”

Revealed 2020 is at the Fremantle Arts Centre until July 26.