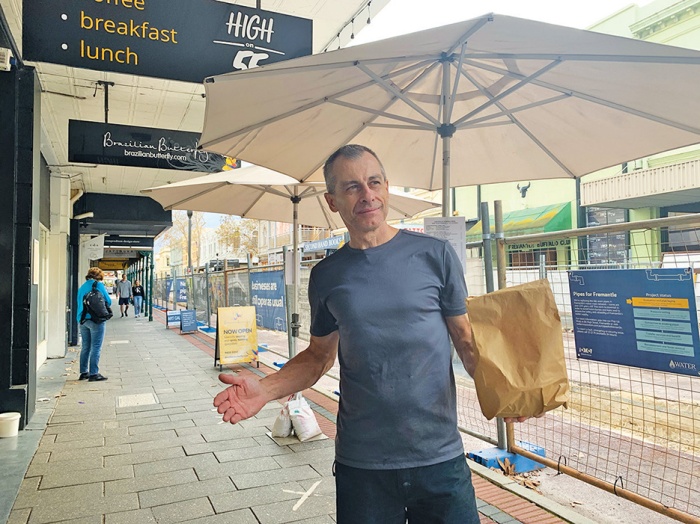 The works, being carried out by Water Corporation contractors, had already been brought forward so they could be finished while the streets were still quiet because of the impact of the coronavirus.

High on 55 owner Wayne Johnson told the Herald he understood the need for the pipe replacements, having been through the same thing in Subiaco 10 years ago, but couldn’t understand why workers seemed to go home at 3pm and didn’t work weekends.

“I spoke to the contractors and they said ‘that’s just the way the contract was drawn up’,” Mr Johnson said.

“I think it was probably drawn up last year before Covid hit and they thought it was the busy time in Fremantle and they didn’t want to cause too much disruption.

“But the streets are still quiet on the weekend, so why can’t they work then and get it done quicker.”

Mr Johnson said the works had affected trade and made it difficult for suppliers to get to the store.

While they’d told traders work could be up to 7pm, that was to allow flexibility and contractors generally started closing the construction site just after 4.15pm.

“Construction work is not carried out on Sundays to ensure residents and businesses in the area have some reprieve,” Ms Lugar said.

The High Street works are scheduled to finish in July.

this opportunity to get some important work done,” she said.