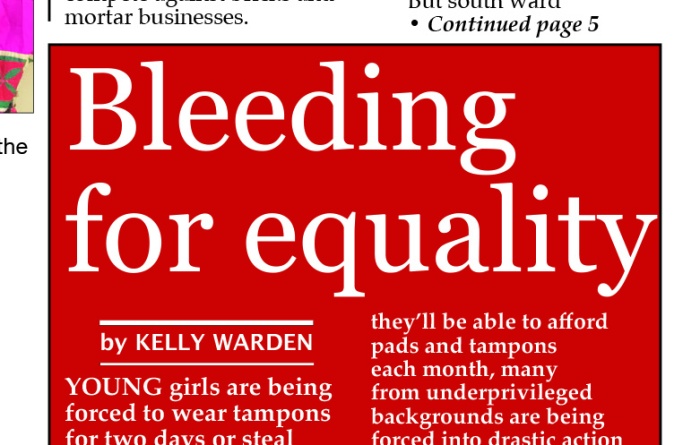 YOUNG girls are being forced to wear tampons for two days or steal socks from laundromats because of WA’s chronic rates of “period poverty”.

Charity groups say that while most women take it for granted they’ll be able to afford pads and tampons each month, many from underprivileged backgrounds are being forced into drastic action because they simply don’t have the money.

“I met this young girl late last year who was experiencing homelessness at the age of 14 due to family violence… she was stealing socks out of a laundromat to be able to deal with her period,” Share the Dignity founder Rochelle Courtenay told the Herald.

Ms Courtenay said the charity had handed out 2.7 million period products to shelters, refuges, community centres, remote Aboriginal communities, schools and hospitals across Australia since it started in 2015, but the biggest demand was in the mining boom state.

“One of our volunteers in WA told me that when we put a vending machine into a school, one of the girls there talked about leaving a tampon in for two days because she didn’t have another option”.

Ms Courtenay says a Pink Box vending machine installed at Royal Perth Hospital dispenses over 500 products a month, making it “the most used vending machine we have in Australia”.

Last year a South Australian report titled “Leave No One Behind” investigated the impacts of poverty on young people. “Girls told us about missing school because they couldn’t afford sanitary products,” the report details.

Share the Dignity provides donations to the Fremantle PCYC in Hilton (it also receives direct contributions from donors) but Ms Courtenay says the Covid-19 pandemic had hit her organisation’s fundraising hard.

“Our March drive was severely affected by Covid,” she said.

The Victorian Labor state government established a $20.7 million program in 2019 to provide period product dispensing machines in all government primary and high schools across the state after making it an election pledge.

With WA’s state election looming, the Herald reached out to both major parties to see what plans they had to tackle period poverty.

“If need for these items is not being met by existing service providers, governments clearly have a role to ensure women and girls’ basic needs are being met,” Ms McGurk said.

“The state government has been looking at schemes in other jurisdictions to determine what works, and which model could be effectively delivered in WA.”

Liberal leader Liza Harvey didn’t respond, but as women’s interests minister in 2015, she was unrepentant when an Indigenous woman in Coolgardie was fined $500 for stealing a box of tampons.

“Stealing of any kind is a serious offence which the community has no tolerance for, and this government doesn’t apologise for handing out swift punishment of actual consequences,” she said at the time.

WA Law Society president Elizabeth Needham had a different take: “Given what she took, it’s a stark example of it being for reasons of poverty,” she tole The Guardian Australia.

Ms Courtenay says period poverty is even more crippling in remote areas where freight costs and a lack of competition pushes prices sky-high.

A mother of two daughters who have endometriosis which can make their periods heavier and more painful, she says the $50 she has to spend a month would be closer to $100 – or even higher – in a remote Indigenous community.

Ms Courtenay said her charity would welcome WA government support, which would help it keep afloat.

“I’d love to see all education departments roll out free sanitary items in schools because then that’s one area we don’t need to worry about.”