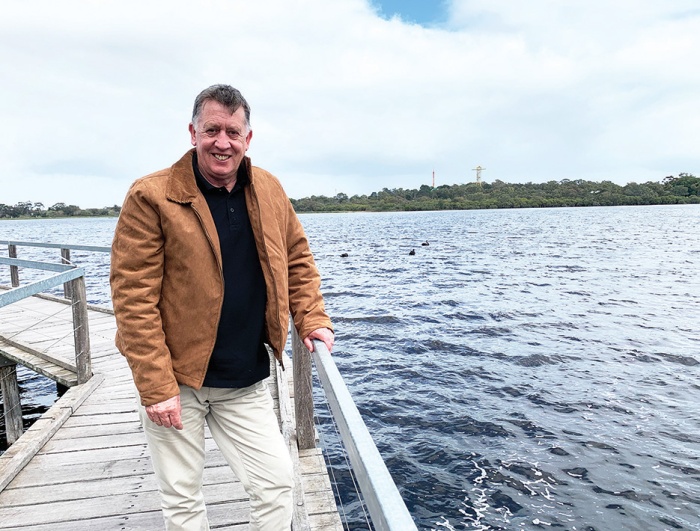 AN old canoe which has mysteriously risen from the mud of Bibra Lake has mayoral candidate Philip Eva thinking more could be done to celebrate Cockburn’s heritage.

The canoe looks to have been dislodged from its original resting place during recent storms, so its age is hard to determine, but Cr Eva was concerned that staff were indifferent about checking it as a potential addition to the Azelia Ley museum.

“A lot of our heritage has already disappeared.”

He sees the city’s heritage as interwoven with its multiculturalism (Bibra Lake itself is named after a Sicilian-born farming pioneer) which continues to flourish to this day.

“Every citizenship ceremony, there are people from 30 countries, and it would be great to be able to connect with them.

“I’d like to see a community where people from all suburbs get together – it’s great for mental health.”

To help bring them together he’s also thinking, like East Ward candidate Tarun Dewan, of a council bus service to bring residents into Cockburn Central.

Cr Eva says it’s not the first time a bus service has been raised, but the eastern suburbs are bursting at the seams but often without the infrastructure to bring people together.

“People are feeling lonely; also there’s a lot of people in the new areas with different nationalities waiting to try to connect with others.”

Other priorities he hopes to further if elected is kicking along the old South Fremantle Power Station redevelopment.

“We have to move the transformer; once that’s gone then we can get that area moving,” he said, noting there had been discussions about a battery bank to help move that process along.

“I’m also quite interested in the Rockingham Road/Phoenix development, as nothing has happened even though it’s been in the pipeline for a long time.

“These old suburbs are feeling left out.

“We need to spend some money, particularly for the sporting clubs.”

He said Yangebup had been the next suburb to be looked at for possible rezoning and revamping but “that has gone off the boil since Covid”.

It was important for locals that it did progress, he said, as it only had three roads in and out which meant its transport links weren’t ideal.

He also wants to press the state government to clean up the Latitude 32 industrial area, as it was being used for dumping waste and containers, while its emptiness was encourage ratbags to use it for antisocial purposes.

A good use might be to encourage Cockburn Cement to move its ageing plant there from Munster, opening up a huge area along a train line for residential development, he said.

Surrounded by Thompson’s Lake and The Spectacles, the housing could be amongst the “Kings Park of the South”.