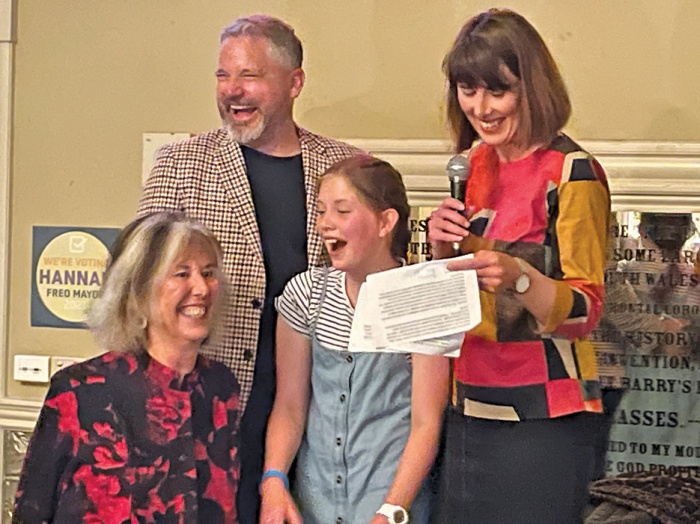 Following her emphatic win in last Saturday’s council elections and surrounded by euphoric supporters who cheered every suggestion the port city had turned a corner, Ms Fitzhardinge said the city needed a rethink of its economic strategy.

“There’s a lot of opinions out there about why this isn’t working, but we need to work on ways … to get those shops filled,” she said.

Promising to be “one of those coffee shop mayors; one of those people you can come up to and say ‘hey, I’ve got this idea’, or ‘something’s not working’,” Ms Fitzhardinge said her priorities would be transparency, plain speaking and relatability.

She comes into the job with a convincing mandate after scoring 46 per cent of the vote in a five-way race.

Fellow councillor Marija Vujcic, who’d led a team of ‘independents’, failed to ignite voters and the Chook called the race after just two wards had been counted; the second was city ward where she’d run a high-visibility campaign but still fell more than 350 votes behind Ms Fitzhardinge. Eventually she finished with 21 per cent of the vote.

Former Fremantle MP Adele Carles was always going to be the dark horse in the race, but her campaign stalled after an initial big splash over plans to repurpose the city’s civic centre as an Aboriginal cultural centre, and she could only raise 16 per cent of the vote.

Martin Douthwaite probably won the day for best return for his money, as his almost non-existent mayoral campaign still netted him a creditable 8.6 per cent, while Rod Grljusich trailed the field with almost 8 per cent.

None of Cr Vujcic’s team were successful on what turned out to be a very long night, with Craig Ross finishing third behind incumbent Adin Lang and small business advocate Mia Kriznic, despite having the backing of the Fremantle Society and the Fremantle Inner City Residents Association.

Ben Lawver convincingly won Hilton with 66 per cent of the vote against Cr Vujcic’s pick Jason Amaranti (23 per cent) and Patrick Glynn (10.8 per cent). Despite the margin Cr Lawver has asked the city’s returning officer to investigate the poll, saying there was an unusually large number of non-residents on the owners and occupiers role, with several sharing a single post office box.

North Ward councillor Doug Thompson was returned, setting a new benchmark for longevity on the council, though he acknowledged being somewhat surprised by the strong showing of Mark Woodcock, who scored 44 per cent of the vote despite not being a ward resident.

South Ward’s result didn’t come in around until an eye-drooping 11.30pm after the WA Electoral Commission picked up an error and called for a recount. Incumbent Andrew Sullivan not only hung on to the bitter end to get his handshake from the returning officer, he hung onto his seat as well (55 per cent), beating lawyer Steven Pynt (41 per cent) and Jennifer Suffling (3.7 per cent).

Ms Fitzhardinge told the Herald it had been a pretty ugly campaign, but she’d steered clear of the worst by leaving social media to her team while she concentrated on speaking directly to potential voters.

“This was a victory of positivity and people power and a reinforcement of the values that make the community what it is; Fremantle is a place of intelligent optimism, resilience and creativity,” she said in her victory speech.