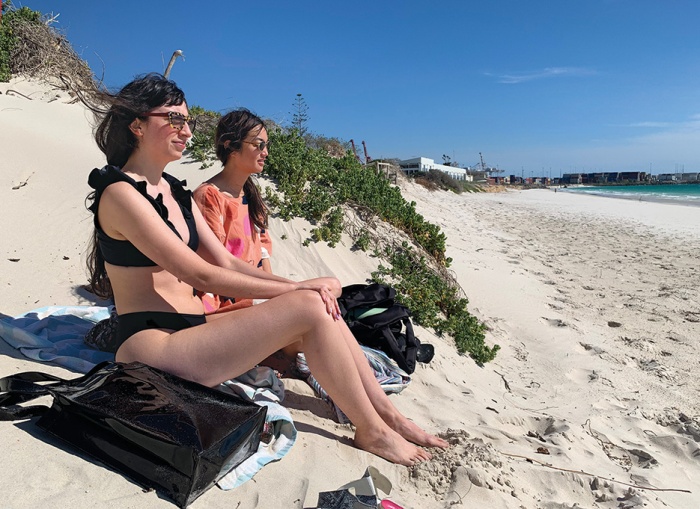 Alma Kuschel and Robyn Tran came to Port Beach for a swim on Wednesday despite knowing about Saturday’s fatal shark attack, but they didn’t have time before the beach was closed after another sighting. Photo by Steve Grant.

A MEETING of Port Beach stakeholders held on Friday was expected to look at whether to extend surf patrols after a fatal shark attack last Saturday and two mid-week sightings.

Fremantle mayor Hannah Fitzhardinge, who noted the rarity of a shark attack at one of the city’s beaches, said she would be having a “debrief” with the Port and Leighton Planning Group to determine if any action needed to be taken.

“We will have a chat about that,” she said of extending patrols south from Leighton Beach.

“The surf club already do foot patrols to Port Beach and have a patrol when the nippers are on, as that obviously pushes swimmers further down the beach, and we’ll have a look at all that and whether it needs to go beyond that,” Ms Fitzhardinge said.

Paul Millachip (57) was swimming about 30 metres off Port Beach on Saturday morning when he was believed to have been attacked and killed by two sharks, one a 4.5-metre great white.

The attack was witnessed by four teens who earned praise for their initial efforts to try and save Mr Millachip and then for warning other swimmers and surfers to get out of the water.

The beach was closed again on Wednesday afternoon and Thursday morning when more sharks was spotted close to shore; they were estimated to be about three metres long.

As a helicopter circled and a Department of Primary Industries and Regional Development boat cruised up and down, beach lovers Alma Kuschel and Robyn Tran watched from the safety of the dunes.

The pair regularly come from the northern suburbs to swim at Port or Leighton Beaches and despite knowing of Mr Millachip’s death had been planning to take a dip on Wednesday.

Fortunately for them, a stiff wind and a warning from other beach users kept them out of harm’s way.

“I’ve never understood why it is never reported in the news that risk of shark attack is considerably higher October to January here because it is seal pup season,” Mr Willicombe said.

“Add to this that the white shark attack pattern is from below and you have two powerful reasons not to swim out of your depth at this time.”

• Paul Millachip was killed in a shark attack off Port Beach last Saturday.

The Chook checked WA shark attack data stretching back 100 years and we reckon he might be on to something; an attack was roughly four times more likely during November (there have been nine) than any month during winter. There were four attacks during December, three each in October and January and just one or two in other months.

We also came across a research thesis by UWA scientist Ana Hara from 2012 (she’s now employed by the WA Museum) which foreshadowed metropolitan shark attacks due to the recovery of WA’s New Zealand fur seal population.

Fur seals were almost clubbed into extinction in WA during the 19th century because of commercial demand for their soft pelts and oil. Even 30 years after sealing was banned, only 500 were found on Eclipse Island near Albany and around the Recherche Archipelago off Esperance.

The first inkling they were recovering came in 1983, then seven years later another 10 colonies were recorded stretching across to Cape Leeuwin, with about 7000 animals recorded.

Dr Hara’s thesis says fur seals may have now pushed their breeding grounds beyond their original habitat, as there’s now a colony established on Rottnest Island where 18th and 19th century sightings were more likely to have been Australian sea lions, which migrate up north to breed.

Other than their tourism appeal as “charismatic mega fauna” and the potential to win hearts and minds locally, male seals were aggressive during breeding season and could actually pass tuberculosis onto humans, she noted.

“In addition, there is the potential for the attraction of sharks, especially around breeding colonies,” Ms Hara wrote.

There were just five recorded shark attacks in WA during the 70 years leading up to 1990 when the major fur seal expansion began, although some are likely to have gone unrecorded. Since then there have been 22; most of those have come from the South West, where historically shark attacks were more common north of Geraldton.

It comes on the back of research published in the Journal of the Royal Society last week that found that juvenile great white sharks were likely to be unable to distinguish between surfers, swimmers and pinnipeds (seals) and

that attacks on humans were therefore likely to be a case of “mistaken identity”.