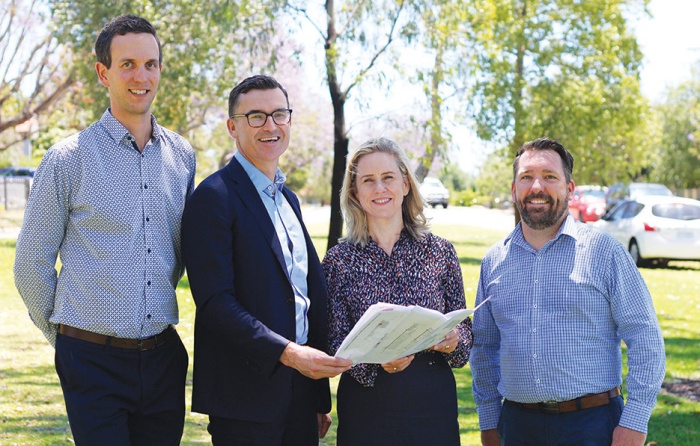 Announcing the boost to the Hilton Revitalisation Project on Tuesday, Mr Carey said timber helped speed up construction, noting the housing department had used them to get six homes built in five months in a northern suburb.

The 32 new dwellings are spread through the suburb and have been paid for by sub-dividing blocks and selling off the historic workers cottages at the front or selling off vacant land.

Mr Carey said more social housing made it possible to help people who’d lived in Hilton for years maintain their connections to their community.The housing styles also increased diversity in the stock.

“The waiting list for public housing is predominantly singles and couples,” he said while looking over two 75sqm concrete pads on Joslin Street which will soon boast a couple of compact double-storey, architecturally-designed homes.

Housing surveys identified many people waiting for social housing weren’t interested in maintaining gardens, but the minister said the department had still boosted its requirements for landscaping and deep soil in recognition that sub-divisions were resulting in canopy loss.

“I don’t think it’s a choice of having a canopy or having density; you can have both,” he said.

“It becomes more walkable and there’s less reliance on cars, but you have to have greening.”

Housing project manager Clint Kealley said the department had signed an MOU with Fremantle council to retain as much vegetation as possible.

Mr Carey said as housing minister he did get people lobbying to decrease public housing in their area, but he says strong communities had a good mix of people.

Hilton was full of history and character. “This revitalisation project will be very welcome, and will help to make Hilton and even more vibrant place for families and individuals to live,” she said.