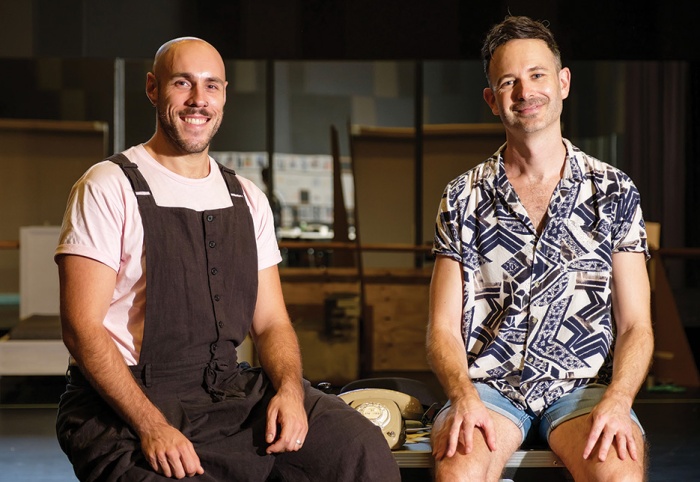 • Playwright Dan Giovannoni with co-creator and director Luke Kerridge at rehearsal for The Great Un-Wondering of Wilbur Whittaker. Photo by Anthony Tran

This happens to the protagonist in the play The Great Un-Wondering of Wilbur Whittaker, who by middle-age has conformed to the 9-5 and his dreary, sensible life in the burbs.

But Wilbur still has a little shoebox of “wonders” from his childhood that he keeps under his bed, until one night The Bureau – a recycling agency for long forgotten wonderings – confiscate it.

The next day, Wilbur starts to slowly disappear and must embark on a fantastical adventure to the outer reaches of the galaxy to rediscover his “wonder”.

The Great Un-Wondering of Wilbur Whittaker was co-created by playwright Dan Giovannoni and director and Fremantle local Luke Kerridge, the award-winning team behind smash-hits HOUSE and Bambert’s Book of Lost Stories.

Giovannoni says Wilbur’s intergalatic odyssey will appeal to people who have experienced the worst of lockdown and isolation.

“Covid definitely clipped our wings in terms of travel, but also maybe more profoundly the wings that let our imaginations go wandering,” he says.

“Wilbur’s adventure into outer space is as much a journey into the galaxies inside his own heart as it is about hurtling on comets through the stars (though that does happen too!)

“I reckon a flight of fancy can be as enriching as a flight to another place.”

Juggling nostalgia, science fiction and midlife crisis, the play is reminiscent of the best and most moving The Twilight Zone episodes like Walking Distance and A Stop at Willoughby.

Like The Twilight Zone creator Rod Serling, Giovannoni says it’s best to have one foot in the present and the other in the past.

“Ideally you meet in the middle! That shoebox can always be open, if you let it – it doesn’t have to be something you just dip in to from time to time,” he says.

“Grown-ups still hold all the wisdom they innately held as children, so you don’t need to be a big kid – you are a big kid.”

The interstellar plot proved challenging for Kerridge, who had to be super creative with his direction and stage design to keep the audience in the moment.

“I often say I like to try and do impossible things on stage but this show has taken it to a whole new level,” Kerridge says.

“The most challenging aspect is it changes location every scene. We wanted to make a grand adventure story on stage so it has taken all of our collective imaginations working in overdrive to make it feel like you do in fact go on a journey across the galaxy.”

The seeds of Giovannoni and Kerridge’s successful creative partnership were sown during a tram journey in Melbourne many years ago.

“We had come from seeing the same show and were dissecting it,” Kerridge says.

“During the conversation he said ‘I think you are my theatrical soul mate’. “Reflecting on that conversation all these years later, he may have been right. It’s very much a harmonious partnership.

“We love bouncing ideas off each other, stretching our imaginations and making each other laugh.”

A Barking Gecko Theatre production, the play is for both adults and children.

“This is a story for everyone, and asks children and grown-ups to meet in the middle,” Kerridge says.

“People often ask about this challenge and assume the solution is ‘chucking a joke in’ for the adults every now and then.

“But really I think the secret is acknowledging and playing to the intelligence of children.”

The Great Un-Wondering of Wilbur Whittaker is at the Heath Ledger Theatre from April 9-16. More info and tix at barkinggecko.com.au