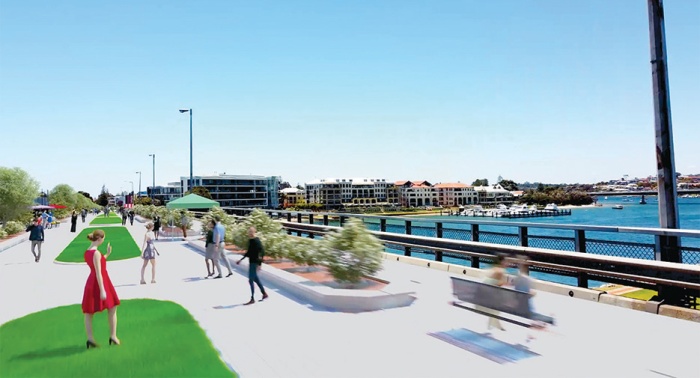 The Society has dreams of a New York-like high line for the bridge.

THE Fremantle Society will release a short film tomorrow (Sunday) in a last-ditch attempt to stop the demolition of the Fremantle Traffic Bridge.

The society has assembled a team of volunteer film-makers to produce the five-minute short Tall Timber, which highlights the bridge’s heritage significance and a proposal to repurpose it as a pedestrian-only public space.

“The problem is that industrial heritage gets little respect, they just see it as a bunch of old sticks,” Mr Dowson said.

“The local council needs to grow up and show some imagination.”

Mr Dowson said the bridge could become a project similar to the Busselton jetty, an iconic structure that was refurbished in 2011 to create a hotspot for recreation and tourism.

“Busselton jetty was saved by local advocacy and council, once it got fixed up was handed to community groups to run it.”

Volunteers like Savanna Viljoen, Ron Arthurs and Nate Garnett have given their time to the campaign.

Unlike the Busselton jetty, saving the Old Fremantle Traffic Bridge doesn’t have strong Fremantle council support, with mayor Hannah Fitzhardinge on the record as saying she’d rather see it go than become an expensive millstone for the city to maintain.

The bridge is category 1a on the state’s heritage list, meaning it has “exceptional significance”.

But in July 2020 the McGowan government announced the 83-year-old bridge’s demolition and replacement was being fast-tracked as part of its stimulus response to Covid.

An alliance of protest groups under The Old Freo Bridge Project banner suggested it could be repurposed as a “New York-style high line park” with art installations and live music on weekends.

A supporting petition reached 8,000 signatures in February, but Main Roads says the bridge is unsalvageable.

A top-level heritage listing hasn’t been enough to protect the bridge.

The society collaborated with Save Fremantle Bridge Alliance, whose founder Isadora Noble said that Main Roads’ plans for North Fremantle’s new Principle Shared Path would not only aid in the destruction of the bridge, but also force pedestrians and cyclists to share a path on a new bridge meters away from traffic.

Ms Noble says that the PSP plans will additionally limit community access to river foreshores, public amenities and connection with significant Indigenous heritage on the eastern and northern foreshores.

The petition is at https://www.change.org/fremantletrafficbridge, while the free film will launch at 6pm tomorrow (Sunday April 10) on the grassed area of N Worrall Park, at the bridge’s southern end.