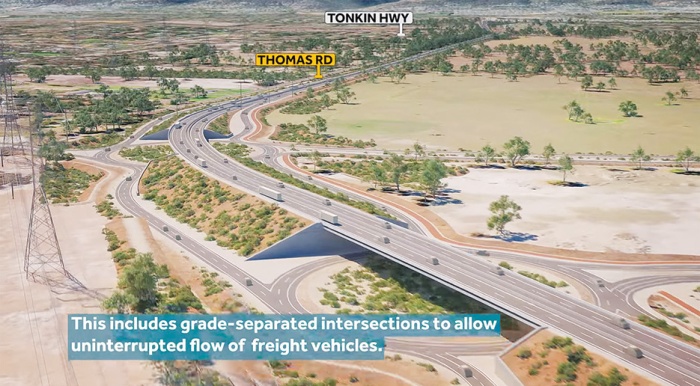 Four lanes of uninterrupted highway will get trucks to the new outer harbour.

THE McGowan government has taken its first significant step since committing to a new port at Kwinana, with Westport releasing concept plans for a $7 million freight corridor connecting it with Tonkin Highway.

The design has Anketell and Thomas Roads serving as a 13 kilometre corridor with grade separated intersections to allow trucks an uninterrupted run to the new $4.7 billion port.

With four lanes of tarmac and huge roundabouts at the intersections, the corridor comes close to pockets of the Beeliar Regional Park, including the sensitive 360-hectare Spectacles wetland and its Aboriginal Heritage Trail, but a spokesperson for Westport said it was likely to only affect the “fringes” of the park.

The Spectacles was “highly unlikely to be impacted”.

“Every effort is made to avoid or minimise any environmental impact,” the spokesperson said, adding that the aim was to create Australia’s most sustainable port.

The Spectacles is one of the largest remaining undisturbed paperbark bushland areas in the metropolitan area, and is culturally significant to Whadjuk Noongar as a ceremonial, food gathering and camping site.

The expanded footprint is also likely to mean some private land resumptions, but Westport’s fact sheet says “land requirements are not yet confirmed” and it’s provided a survey form on its website for affected landowners.

The final design would be released in about 18 months after “consultation and environmental and cultural surveys,” according to the spokesperson.

Westport, Main Roads and the Department of Planning, Lands and Heritage were planning an online information session on Thursday evening, just after the Herald’s deadline.

The Herald contacted the Friends of the Spectacles and the Medina Aboriginal Corporation but they declined to comment.