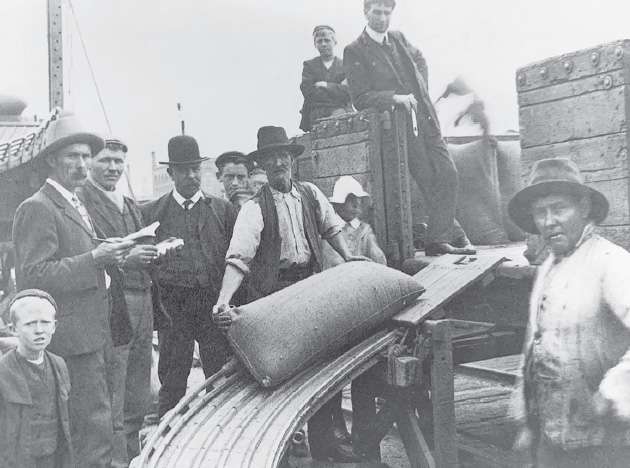 • The steamship owners tried to split the lumpers.

RESEARCHER Daniel A Elias had a great response to last week’s first instalment of his research into the little-known lumpers strike of 1899, which is helping him towards a PhD examining the tension between dockside workers and authorities throughout the last century. As a result of his call for archive material and ephemera, he even got an email from a gent who has the membership cards of old lumpers stretching back a century. If you’ve got a connection to Fremantle’s port through family and have some old photos, documents or diaries tucked away in the attic, let him know at freo.maritimephd@gmail.com. As we pick up the story again this week, the Steamship Owners Association have tried to drive a wedge through the workers by only offering employment to those who sign up under a new set of conditions.

THIS was the Association’s gambit to split the Fremantle Lumpers with the threat of unemployment.

The notice backfired. Instead of splitting the lumpers, it spurred them into action; they called a member’s meeting and resolved that they would only return to work on SOA ships if the Association recognised the Union as a legitimate actor in negotiating wages and conditions.

In 1899, trade unionism was a relatively new phenomenon. There was not even an official institutional method to resolve or arbitrate industrial disputes.

The Fremantle community came together in support of the lumpers, as did many others in Western Australia.

The work stoppage began on March 1, with the Union stating: “We claim that we are not striking. We simply refuse to accept the reductions in wages which the Steamship Owners Association has arbitrarily made.”

Whether it was an employer lock-out or a worker strike, an impasse had been reached and industrial reconciliation was required.

A spokesperson from the Association warned that they had already defeated two labour strikes in the dominions of Victoria and Queensland.

Speaking of their financial superiority, they said they would not back down “even if the fight lasted for 12 months”.

Neither side looked as though they would give in. While the Association put up a strong front, the lumpers strike fund garnished donations from community members far and wide.

Recognising the absence of a conciliatory mechanism, Clark and others organised a conference to settle the dispute.

Under the chairmanship of the mayor, the Union and Association demonstrated a considerable inclination to compromise for a resolution.

Talks ran aground however, failing on the opposing principles of freedom of contract and collective bargaining. Slowly, these principals were becoming the fulcrum on which the dispute began to hang on.

Unrest followed on the wharf, and a large crowd of Fremantle locals gathered to watch and cheer on as the starved and disgruntled lumpers cleared out strike breakers – non-union workers who were imported from other colonies.

The Union leaders stepped in to stop any violence and destruction of property.

The event was a public relations disaster, with the press portraying the lumpers in a negative light for the first time since the dispute began.

Under deteriorating circumstances, a second conference was called and undertaken with urgency. Sitting on April 24 and convening for three days, delegates from the SOA and the Union haggled over new terms. Freedom of contract was asserted and the Union had the pay cuts reversed, ending the dispute.

Forrest initially refused to establish an arbitration court, for that would tacitly legitimise trade unions as industrial participants.

However, the speed in which the second conference resolved the dispute helped change his position.

Organised labour was here to stay, and within a year of the work stoppage there was legislated a compulsory Conciliation and Arbitration Court.

This moment signalled a divergence from labour movements globally.

Whereas organised labour often defined itself in opposition to the state and commerce, the creation of the Court marked a moment where the labour movement came to define itself as co-administrators of their fate.

The establishment of the Court was also a convergence with similar arbitration courts across pre-federated Australia. It is indeed a profoundly unique institutional feature that has shaped the country to this day.