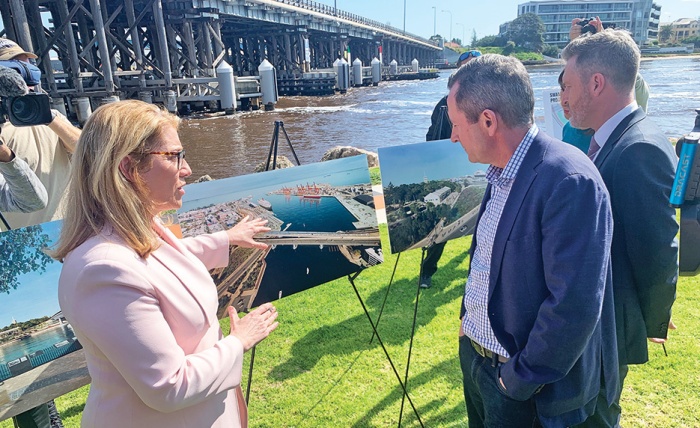 THE ‘final’ design of the new Fremantle Traffic Bridge was released on Sunday, and while it was lauded by premier Mark McGowan as meeting the needs of future generations, fans of its timber predecessor have warned their campaign to preserve it is only now kicking into gear.

Transport minister Rita Saffioti confirmed “most” of the old traffic bridge would be demolished.

“We’re working with the Heritage Council about how we continue to have some reflection of the older bridge here,” Ms Saffioti said.

“The capstan and the orbs are two things that they want to retain – those orbs up there,” she said, indicating the brass ornaments and plinths at each end of the bridge which include the plaque announcing its opening by premier John Willcock in December 1939.

Ms Saffioti said the alignment meant Main Roads was able to push the northern end of the bridge away from Northbank residents, while a complete rethink of the southern end at Cantonment Hill will see Queen Victoria Street become a seamless drive into Freo while Canning Highway dives under the bridge to send traffic towards Victoria Quay.

“What is does is create this huge parkland which will be more than a hectare as you come into Fremantle in front of the Naval Store,” Ms Fitzhardinge said.

“It means people will probably have to make a choice earlier as to whether they’re coming to Fremantle or not.

“We hope to create a sense of entry into Fremantle.”Ms Fitzhardinge said while it’s not easily seen on the plans, the design will also improve access to the riverfront in North Fremantle.

Mr McGowan also reiterated that the old bridge was “nearing the end of its life” and said the replacement would have “a whole bunch of design initiatives” to meet community needs.

“The new bridge will be jointly funded by the state and federal governments –$140 million each,” Mr McGowan said.

“It will have four lanes, it will have cycle and pedestrian pathways and  it will also have a new passenger rail bridge as part of it, and it will be there for the long-term future of Western Australia for many, many, many generations to come.

“The plan is to start the bridge construction later this year or next year.”

Fremantle federal Labor MP Josh Wilson, who’d in 2018 called for the timber bridge to be retained for community concerts and picnics, described building a new bridge as an “incredibly momentous project”.

“This bridge has given magnificent service to the people of Fremantle and the broader Western Australian community for a long time, but it has also needed to be replaced for for some considerable time and finally, we’re going to see that occur,” Mr Wilson said at the plan unveiling.

“It will not only be a genuinely 21st century span – safer traffic, safer river passage underneath, the opportunity to get more freight on rail … and a share path for cyclists and pedestrians of some seven metres.”

“At the moment cyclists going across have to stop for pedestrians and vice versa.”

But the Save the Bridge Alliance, which includes several allied groups such as the Fremantle Society, panned the designs as

“boring”, heavy on the concrete and looking like it was dragged out of Main Roads stock design cupboard.

SBA founding member Richard Evans said he’d been “keeping the powder dry” since their first scuffle with Main Roads and its Bridge Alliance consultants, as without a design they’d had little to take aim at.

Mr Evans said following Sunday’s announcement, he’d been following Mr McGowan’s Facebook page and reckons there were hundreds of irate comments before they were pulled.

“If you have a park in front of the Naval Stores, and because there’s no left turn onto Canning Highway, you could walk straight onto the high line and across the river,” he said.

“Our campaign starts now,” he said, adding that the community group that saved the historic Busselton Jetty was right behind their campaign.

Mr Evans will be giving a short presentation at the end of Politics in the Pub at The Local Hotel in South Fremantle on Tuesday evening, with the aim of convincing the audience to make the bridge the following month’s main topic of discussion.

Fremantle Society president John Dowson got stuck into Main Roads saying it inflicted “ugly urban design on communities” and the proposed bridge was more of the same.

“Look at the disaster Main Roads have created at the High Street/[Stirling] Highway intersection; the ugliest of solutions for a massive amount of money, solving what,” Mr Dowson said.

“Where is Fremantle council in all this? Labor mayor Fitzhardinge had her head bobbing [up and down] as she stood behind Rita Saffioti who was explaining why the heritage bridge has to be demolished after so many millions have been spent fixing it up.

“Has Labor mayor Fitzhardinge ever read her own masterplan on her own council’s website (Fremantle 2029 Transformational Moves)?

“It says: ‘Keep the old traffic bridge for pedestrians and cyclists while building a new traffic bridge’,” Mr Dowson wrote in an email to members.