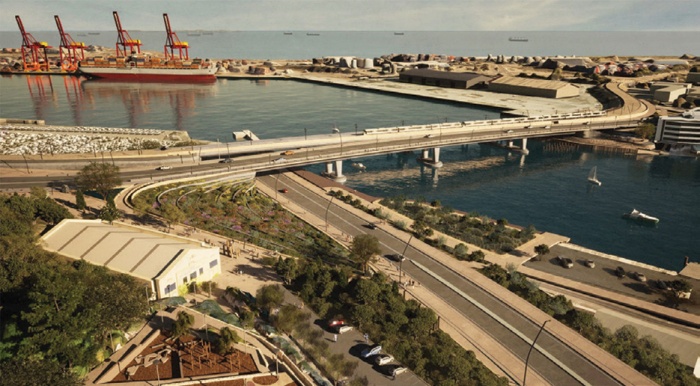 Canning Highway will be realigned under the new traffic bridge and along the Swan River.

DESIGN FREO chair Pippa Hurst has added her voice to concerns emerging over Main Roads’ plans to divert Canning Highway along the foreshore of the Swan River as part of its new Fremantle Traffic Bridge project.

“And down on the foreshore this morning one of my colleagues sent me photos of crosses on trees; there’s stakes in the ground, so you can see the impact of where it’s going to go.

“All that conversation about where the original alignment was going, and suddenly out of left field we’ve got a completely realigned highway that is going to seriously affect the amenity of the river.

“It’s completely disabled the east-west connection. “Sally Matthews, who’s been working with me on this, she spends a lot of time down there.

“She made some really interesting observations, one of which is you never speed when you’re driving down that road.

“So although Main Roads will tell you that there’s actually quite a high volume of traffic, everyone that drives along there knows that it is a recreational zone.

Ms Hurst said the leafy embankment behind Beach Street provided river enthusiasts with a buffer from the busy highway, allowing them to focus on the natural beauty of the river.”

She’s also concerned that the planners haven’t been taking climate change into account, with a major riverside highway likely to be inundated as seal levels rise.

“So, on every level it doesn’t make sense,” she said. Ms Hurst said the project needed a pause so people could consider the long-term development expected in the area.

“Do we actually just hold off for a while and spend $20 million shoring up the bridge for another 20 years until we know what happening with the whole precinct?

“Because when you think about the cost of keeping the bridge going for another couple of decades, as opposed to the enormous amount of investment in infrastructure, which ultimately might not serve us well, then it doesn’t make sense.”

Ms Hurst doesn’t believe the traffic bridge could host markets or concerts once its decommissioned for traffic, given it’s hot and windy, but says the existing foreshore was a perfect location and should be preserved.

“I don’t think everyone in the community is aware of what this rally means, and let’s look at the concrete canyons along High Street as a warning of what happens when you take your eye off the ball.”

THE traffic bridge is going to be the focus of this coming week’s Politics in the Pub.

Hosted by The Fremantle Network, the event will being together Richard Evans and Isadora Noble from the Save the Bridge Alliance, Gerry MacGill from the North Fremantle Community Association, and Westcycle’s Georgia Scott who’ll be looking at how the project will impact people on two wheels.

It’s being held at the Local Hotel on Tuesday September 27 at 7pm.