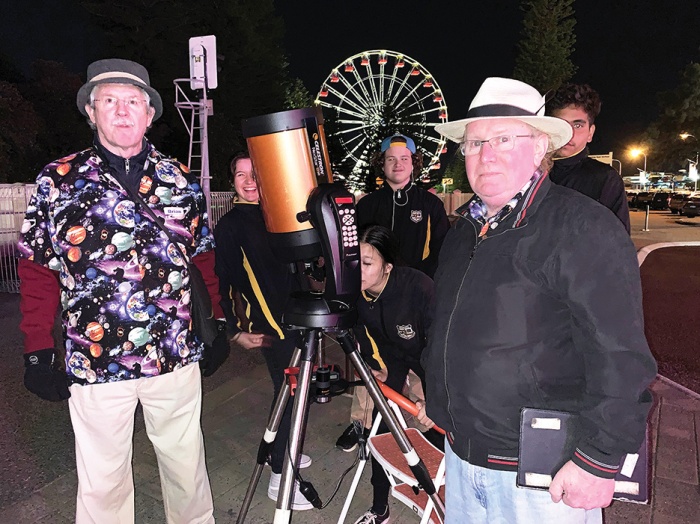 • Brian Leahy and Hubert Rady give a visiting class from Morawa a look at Saturn and its rings. Photo by Steve Grant.

THE kids from Morawa, in the big sticks for a school camp, are walking through Freo when a bloke calls out from the semi-darkness.

There’s a couple of nervous giggles, but after a feed of fish and chips down at the harbour and a day of sightseeing to download, they’re on a mission and simply skirt a bit wider and head on their way.

Then one of the class, a tall Aboriginal teen, suddenly cottons on to what was said and stops in his tracks.

Moments later he’s “oohing” and “aaahing” into Hubert Rady’s telescope while the rest of his classmates hover close, hoping to be next in line to see the mysterious discs that have fascinated stargazers since Galileo Galilei first observed them in 1610.

Such are the pleasures of discovering Mr Rady and his Fremantle Sidewalk Astronomy.

Whenever there’s something interesting in the heavens and a clear sky, he’ll set up near the dog statue opposite Cicerello’s at Fishing Boat Harbour and invite passers-by to have a look.

On the chilly night the Chook bumped into him, fellow amateur astronomer Brian Leahy from Leeming had joined him for a session.

Mr Hubert said he was inspired by John Dobson, who established the San Francisco Sidewalk Astronomers in the late 1960s in an effort to bring the science to the public.

Mr Rady says he lets people know when he’ll be out on his Fremantle Sidewalk Astronomy Facebook page or on Freo Massive.