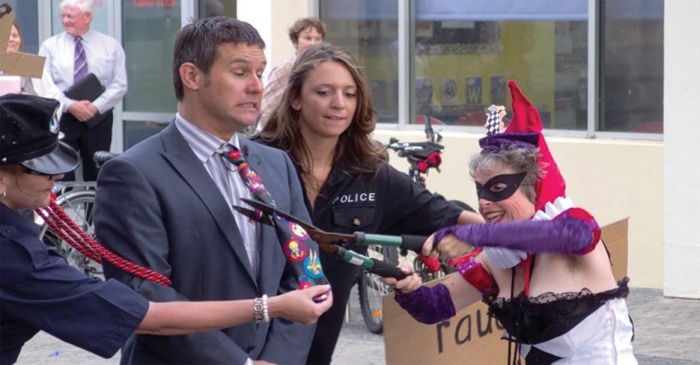 DODGY STEVE is a dodgy Western Australian heritage consultant and Board member of the Fremantle Carnival Authority who is currently working with Woodarse Energy Pty Ltd to transform the world’s oldest and largest outdoor rock art gallery (the Burrup Peninsula) into an industrial wasteland, and the earth’s climate into a fan-baked oven.

SINCE 2020, Carnival celebrations around the world have been cancelled or postponed due to Covid.

But in the People’s Republic of Fremantle, after a break since 2016, the Fremantle Carnival Authority is pressing ahead with an ambitious schedule of Covid-safe events on Saturday February 26 (the last weekend of Carnival), to mark this important annual global ritual of renewal.

Established in an East Fremantle backyard in 2009, Fremantle Carnevale was inspired by the Festival of Misrule celebrated in parts of Europe, Latin America and elsewhere. Migrants to Australia have long celebrated Carnival amongst themselves, while the Carnival tradition of eating pancakes on ‘Shrove Tuesday’ has survived in the wider Anglo-Australian community.

Although Rio and Venice’s commercialised Carnivals are well known, many celebrations take place far in small communities off the beaten track where the tradition is closer to its pagan roots.

Ash Wednesday then ushers in Lent, the 40 days of abstinence and repentance leading up to Easter, which was instituted by the Catholic Church.

Carnival is derived from the Latin carne vale – farewell to the flesh – and signifies the last chance to indulge in meat (and other pleasures!) before Lent.

Some have linked it to the Roman midwinter festival of Saturnalia, presided over by a King or Lord of Misrule, where slaves were given temporary liberty.

Carnival’s ritualised inversion of social roles is expressed through masquerade, cross dressing and the mockery of establishment figures such as politicians, the church, army and police.

Carnival has often provided an outlet for discontent with the ruling class, and has been banned by fascist dictators, on the pretext that masks might provide a perfect cover for leftist insurgents to launch a revolution.

Many Italian Carnivals (including Freo’s) are presided over by a King who embodies the spirit of excess and irreverence.

On Shrove Tuesday the King is put on trial before an absurd Carnival tribunal, charged with ludicrous crimes and made a scapegoat for the festive uproar.

After a fake execution (and sometimes a burning in effigy), a mock funeral procession takes place – here to a wake at Clancy’s Fish Pub, with a heavily pregnant Widow of Carnival (a man in drag) in tow. The widow assures the royal succession for next year’s Carnival by giving birth to a baby Carnival King.

Former Fremantle mayor Brad Pettit was also a regular focus of popular mockery during the Weiberfastnacht (German Women’s Carnival) adapted from the Carnival of Cologne, in which revolting women of Fremantle arrest the mayor, seize control of the city and cut off his tie in a ritualised act of castration.

The recent election of Hannah Fitzhardinge is an obvious technical challenge for the carnival authority, which may introduce a practice from Germany’s Rhineland region in which the local mayor is instead tarred and feathered…

For up to the minute details, see Facebook: Carnevale of the People’s Republic of Fremantle